President Joe Biden gave a speech and answered questions from the press for nearly two hours on Wednesday, one day before the anniversary of his inauguration.

Biden addressed a wide range of topics and answered questions from outlets across the political spectrum. On his first year as president, Biden said he “didn’t overpromise” but instead made “enormous progress.” On the possibility of a Russian invasion of Ukraine, Biden again threatened sanctions but said Russian President Vladimir Putin would “test the West … as significantly as he can,” adding, “My guess is he will move in.” On the future of his Build Back Better agenda, the president said, “We’re going to have to probably break it up” into separate bills. Biden also briefly lamented the polarized nature of political news. 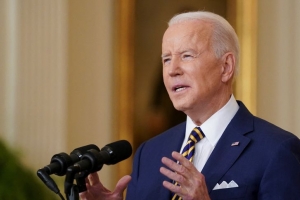 President Biden said he likely would have to break up his stalled healthcare, education and climate agenda to get his policies through Congress and predicted Russia would make a move against Ukraine, warning that Moscow would face punishing sanctions for doing so.

The president. in a nearly two-hour news conference wrapping up his first year in office, defended his policies and his administration’s response to Covid-19 but also acknowledged that many Americans remain frustrated by the duration of the pandemic.

Read full story
Some content from this outlet may be limited or behind a paywall.
See full media bias rating for Wall Street Journal (News)
From the Left
12538
Joe Biden
Biden predicts Russia will invade Ukraine
NBC News (Online) 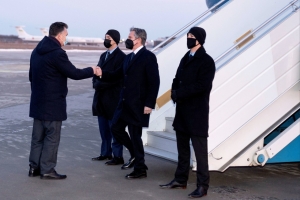 President Joe Biden predicted Wednesday that Russia will invade Ukraine, just as the United States launched a fresh effort to resolve the standoff and Moscow continued to mass troops on its neighbor's doorstep.

“My guess is he will move in, he has to do something,” said Biden during a news conference marking his first year in office, referring to Russian President Vladimir Putin and Ukraine.

The declaration from Biden was striking given the escalating tensions there and the continued efforts by America and its allies to find a diplomatic solution. 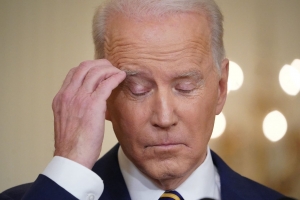 President Biden on Wednesday defended his record during his first year in office, saying he "didn’t overpromise," but instead "outperformed," maintaining the "enormous progress" his administration has made and vowed to "stay on track" going forward.

During his first press conference in months—his tenth since taking office—the president was asked whether he overpromised on what he could achieve during his first year at the White House, as the country grapples with rising inflation, a surge in the highly-transmissible omicron variant of COVID-19, and as his legislative agenda is stalled in Congress.

Book Discussion with Jay Van Bavel, co-author of The Power of Us