The Senate voted 86-11 on Thursday to approve $40 billion in additional military, economic and humanitarian aid for Ukraine as Russia’s invasion continued.

Speaking before the vote, Senate Majority Leader Chuck Schumer (D-N.Y.) said the aid package would “meet the large needs of the Ukrainian people as they fight for their survival.” Minority Leader Mitch McConnell (R-Ky.) also supported the bill, saying, “Anyone concerned about the cost of supporting a Ukrainian victory should consider the much larger cost should Ukraine lose.” President Joe Biden also praised the bill for “sending a clear bipartisan message to the world that the people of the United States stand together with the brave people of Ukraine.” Biden is expected to sign the measure promptly.

The 11 Republicans who voted no included Sen. Rand Paul (R-Ky.), who argued that “each income taxpayer in our country would need to pay $500 to support this $40 billion.” Paul previously delayed the bill’s Senate passage on May 12 by objecting to unanimous consent to waive procedural votes. The legislation passed 368-57 in the House on May 10; all 57 no votes came from House Republicans.

Coverage was widespread and mostly balanced across the spectrum, with most outlets covering the bill’s specifics and the arguments of both supporters and opponents. Right-rated outlets were somewhat less likely to continue featuring the story into the evening on homepages. 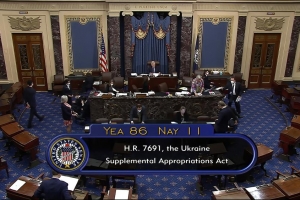 The Senate whisked a $40 billion package of military, economic and food aid for Ukraine and U.S. allies to final congressional approval Thursday, putting a bipartisan stamp on America’s biggest commitment yet to turning Russia’s invasion into a painful quagmire for Moscow.

The legislation, approved 86-11, was backed by every voting Democrat and most Republicans. While many issues under President Joe Biden have collapsed under party-line gridlock, Thursday’s lopsided vote signaled that both parties were largely unified about sending Ukraine the materiel it needs to fend off Russian President Vladimir Putin’s more numerous forces. 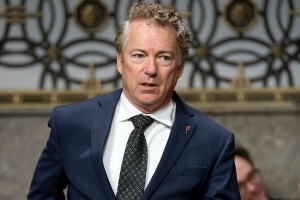 In a split with party leaders, 11 Senate Republicans Thursday voted against a bill to send $40 billion in military aid to Ukraine as Russia's invasion of the nation nears its fourth month.

Despite some GOP opposition, the bill passed by a final tally of 86-11, with the support of leadership from both parties and a significant majority of Republican senators. It will now go to President Biden's desk.

Sen. Rand Paul, R-Ky., led the opposition to the bill, demanding an inspector general be appointed to oversee the spending. The U.S. total financial commitment to...

The Senate voted 86-11 Thursday to approve a $40 billion Ukraine aid package that would replenish U.S. stockpiles of weapons transferred to Ukraine and provide billions of dollars to help the Ukrainian government continue operating and for humanitarian assistance.

President Biden is expected to sign the legislation, which exceeds his $33 billion request to Congress, immediately. The House passed the legislation overwhelmingly earlier this month in a 368-57 vote.