A bipartisan group of Senate negotiators said Monday that they had reached a deal to codify same-sex marriage, thanks to an amendment addressing some senators’ religious liberty concerns.

Key Quotes: Sens. Rob Portman (R-Ohio), Tammy Baldwin (D-Wis.), Susan Collins (R-Maine), Kyrsten Sinema (D-Ariz.), and Thom Tillis (R-N.C.) released a statement on their agreement, saying, “Through bipartisan collaboration, we’ve crafted commonsense language to confirm that this legislation fully respects and protects Americans’ religious liberties and diverse beliefs, while leaving intact the core mission of the legislation to protect marriage equality. We look forward to this legislation coming to the floor and are confident that this amendment has helped earn the broad, bipartisan support needed to pass our commonsense legislation into law.”

What’s Next: Senate Majority Leader Chuck Schumer (D-N.Y.) reportedly scheduled a test vote for the bill on Wednesday. Senate Democrats, who would likely all support the bill, would need at least 10 Senate Republicans to overcome the possibility of a filibuster. Same-sex marriage is just one of several issues Congress is preparing to tackle before midterm election winners are sworn in next year.

How the Media Covered It: Coverage was common in left and center-rated outlets but relatively rare in right-rated outlets on Monday evening. Coverage varied on using the term “marriage equality” outside of quotes. 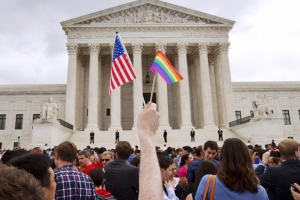 The New York Democrat teed up a procedural vote for Wednesday that will require 60 votes to advance to final passage as early as this week.

The bill is expected to clear the 60-vote filibuster threshold after a bipartisan group spearheading the legislation announced they had an agreement on protecting nonprofit religious groups that oppose performing... 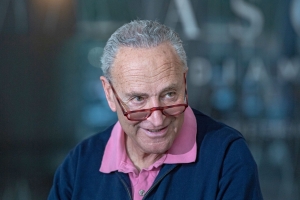 Senate Democrats are expected to introduce a revised version of the Respect for Marriage Act this week. The bill, which would enshrine same-sex marriage rights into law, will need support from at least 10 Republican senators in order to become law.

“We’re confident that we’ll have the votes when it comes to the floor. We’ve been guaranteed that this is going to come up before January,” an unnamed person, identified as being “close to negotiations,” told the international news outlet Semafor.

The Senate is set to vote this week on a bill to codify the Supreme Court’s same-sex marriage protections after a bipartisan group of senators unveiled a deal earlier Monday, signaling they believe they have the votes to get past a filibuster and move the measure to President Biden’s desk.

Senate Majority Leader Charles Schumer (D-N.Y.) filed cloture on the legislation on Monday, teeing up the first vote on the measure for Wednesday.