Joe Biden Swings Back At Challengers

On the second night of the Democratic Presidential Debates, Joe Biden made some aggressive moves against his other rivals in an effort to maintain his front-runner status. While many think that Biden performed well enough to hold onto his numbers, others wish he had summoned a more commanding performance. 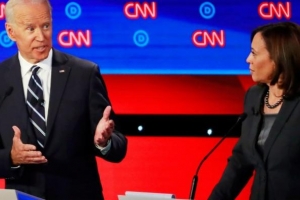 All night long, almost every candidate on stage aimed their attacks at Joe Biden. Early on, Kamala Harris referred to him as “Senator Biden,” a perhaps not-so-accidental demotion. Julian Castro, Bill de Blasio, and Cory Booker all went after him in rapid succession. Even Kirsten Gillibrand claimed that Biden opposed women working outside the home, a particularly implausible accusation.

Here’s the good news for Biden: If tonight doesn’t do any damage to his numbers, he will probably cruise to the nomination. This is life as the frontrunner – you get...

Read full story
Some content from this outlet may be limited or behind a paywall.
See full media bias rating for Guest Writer - Right
From the Center
308
Elections
Democratic debates: Joe Biden hits back at rivals in Detroit
BBC News

Former Vice-President Joe Biden has come under attack from other Democratic 2020 candidates in a televised debate.

There were sharp exchanges on healthcare and the southern border between the frontrunner and nine other hopefuls on stage in Detroit.

In an echo of the last debate in June, Senator Kamala Harris launched another assault on Mr Biden's record on race.

But she herself had to defend her actions against drug offenders when she was a prosecutor in California.

"She put over 1,500 people in jail for marijuana violations, then laughed about...

Read full story
See full media bias rating for BBC News
From the Left
308
Elections
Joe Biden Did Fine, and That Might Have Been Enough
Guest Writer - Left 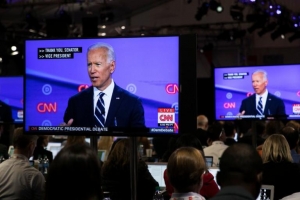 One month after a wobbly debate performance that reinforced the perceived weaknesses of the ostensible front-runner — Is he too old? Too nostalgically moderate? Too politically brittle to defend himself when challenged? — former Vice President Joseph R. Biden Jr. settled behind his center-stage lectern on Wednesday night and supplied some answers: He is still old. He is still nostalgic. And he is still the front-runner, until someone can prove otherwise.

Far from perfect, and rarely exactly steady, Mr. Biden nonetheless achieved at least some of the goals that seemed...