President Biden signed an emergency bill averting a rail strike that the Senate passed on Thursday. Signing the bill, Biden spoke about the state of the U.S. economy, citing Friday’s job report as evidence of its strength.

For Context: Biden asked Congress to intervene in the labor dispute earlier this week. A key element of the dispute was a push from some of the rail unions for seven days of sick leave per year. The Senate rejected this proposal.

Key Quotes: Biden said the bill “ends a difficult rail dispute and helps our nation avoid what without a doubt would have been an economic catastrophe at a very bad time in the calendar.” Biden said a rail strike would have “devastated” the economy, calling the rail network the “backbone of our supply chain,” adding that averting it had lowered the risk of recession and signaled America was “moving in the right direction.” Speaking on the failed sick leave proposal, Biden said that “every worker in America” deserves paid sick leave and that the “fight isn’t over.”

How the Media Covered It: Coverage across the spectrum contrasted Biden’s pro-union reputation with his decision to stop the rail strike. The Associated Press called Biden a “staunch labor union supporter” while also quoting a number of sources disagreeing with his assessment of the economy. CNBC detailed how a rail strike would “potentially raze the economy.” The Washington Times (Lean Right Bias) agreed a rail strike would “devastate” the economy.

Biden, despite his long history of supporting trains and railway workers, signed the bill to override their threat to strike for better working conditions.

The president said it was a “tough” decision to sign the bill but that it was the “right thing to do at the moment.”

“A rail shutdown would have devastated our economy,” Biden warned.

Earlier this week, the president punted the issue to Congress and... 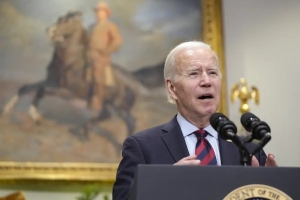 President Joe Biden assured Americans on Friday that the U.S. economy is chugging along in the holiday season, but the very strength of a new jobs report showed that high inflation remains a recession threat.

At the White House, the president signed an emergency bill to avert a rail strike that he said could have caused 765,000 job losses in two weeks and plunged the country into a painful downturn. But many voters and economists still fear that a recession is nigh and the price of reducing high prices will... 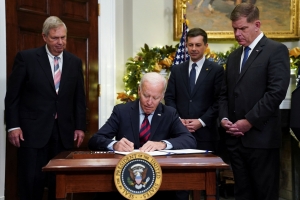 President Joe Biden signed a bill into law making a rail strike illegal, preventing workers from walking off the job weeks before the holiday season.

“The bill I’m about to sign ends a difficult rail dispute and helps our nation avoid what, without a doubt, would have been an economic catastrophe at a very bad time in the calendar,” Biden said Friday morning before signing the bill.

After his administration aided in negotiations for months, and the sides reached a tentative agreement in September, talks ultimately stalled and rail workers...