Coverage of Trump's boycott call was widespread across the spectrum on Sunday. Coverage in left-rated outlets mentioned Texas Republicans' voting bill and referred to the voting laws as "bills that place restrictions on voting" and "Georgia's new sweeping election law that imposes significant new obstacles to voting." Coverage in right-rated outlets referred to the voting laws as "election reform" and "a comprehensive new law aimed at securing the state’s elections." 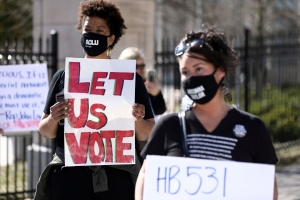 U.S. corporations face growing pressure and threats of boycotts to publicly oppose Republican-backed election legislation in Georgia and other states that critics say harm the voting rights of Black Americans.

The opposition intensified on Friday when Major League Baseball announced it would no longer hold the 2021 All-Star Game in Atlanta this summer, with commissioner Robert Manfred saying the league “fundamentally supports voting rights for all Americans and opposes restrictions to the ballot box.”

Read full story
Some content from this outlet may be limited or behind a paywall.
See full media bias rating for CNBC
From the Right
6705
Voting Rights and Voter Fraud
Trump: 'Boycott' Businesses for Opposing Election Laws
Newsmax (News) 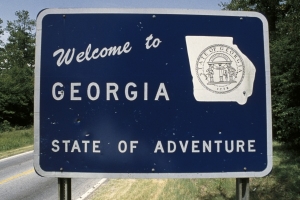 Former President Donald Trump has long denounced the "dirty" play of liberal activists pushing cancel culture against conservatives throughout society, but now says "it is finally time" for Republicans and conservatives to do the same and boycott woke businesses offended by the passage of election laws.

"For years the Radical Left Democrats have played dirty by boycotting products when anything from that company is done or stated in any way that offends them," Trump wrote in a Save America PAC statement Saturday. "Now they are going big time with the...

Read full story
Some content from this outlet may be limited or behind a paywall.
See full media bias rating for Newsmax (News)
From the Left
6705
Voting Rights and Voter Fraud
Culture wars strain once unshakeable bond between Republicans, corporate America
NBC News (Online) 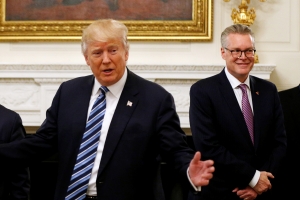 Republicans and corporate America are on the outs.

In the past week alone, American Airlines and computer company Dell came out strongly against GOP-led bills that place restrictions on voting in their home base of Texas. South Dakota Gov. Kristi Noem, a rising star in Republican Party, continued to take heat for nixing a bill that would have imposed a ban on transgender athletes in sports, citing the potential impact on her state's bottom line. And conservatives spent days bashing "vaccine passports" some businesses think are needed to return to...

Two U.S. senators, a Republican and a Democrat, asked Congress on Monday to reauthorize the Voting Rights Act, as Republican-controlled state legislatures pass...

The claim: Colonial Pipeline hack proves election infrastructure could have been hacked Communities along the East Coast continue to face gas shortages after...

Will anything break the GOP’s embrace of election lies?

Sens. Joe Manchin and Lisa Murkowski teamed up Monday to call on top lawmakers to take up a bipartisan reauthorization of the Voting Rights Act, a move aimed...

Senate Majority Leader Chuck Schumer, D-N.Y., may have a difficult time finding enough support among progressives and moderates to get the For the People Act...

During the debate over Representative Liz Cheney’s role in leadership, there were plenty of arguments offered as to why her ouster wasn’t really about her...