Senators Bernie Sanders (I, VT) and Lindsey Graham (R, SC) on Monday were able to find some common ground during a debate that aired on Fox Nation.

Moderated by Fox News anchor Baier, the discussion was part of a series called The Senate Project that tries to find bipartisan solutions. Sanders and Graham agreed that the new bipartisan gun safety framework is a positive step forward, Russian President Vladimir Putin is a bad leader and the future of transportation will be electric. They also both concluded that the economy is in poor shape, pointing to Social Security's solvency issue and the negative impact of rising inflation. While they disagreed on nearly every other talking point, Graham said he "thoroughly enjoyed" debating with Sanders after the discussion was over.

Center-rated outlets such as Roll Call, The State and other local news affiliates were much more likely to highlight the bipartisan agreements of the debate. Left-and right-rated outlets were more likely to sensationalize the "spar" between the two senators and emphasize the policy issues that they publicly stand apart on. 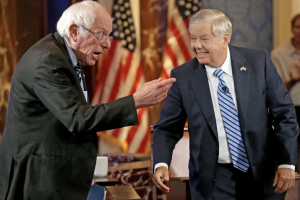 It started with a handshake, but U.S. Sens. Bernie Sanders and Lindsey Graham wasted very little time when their debate devolved into the same disagreements they would have had if they stayed in D.C.

Read full story
Some content from this outlet may be limited or behind a paywall.
See full media bias rating for Boston Herald
From the Center
6612
Bridging Divides
SC’s Graham, Sanders square off in televised debate to find common ground in DC
The State 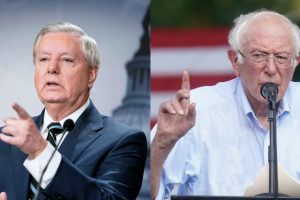 The two did agree that Social Security has a solvency problem, that the future of the country’s transportation will be electric and that Russian President Vladimir Putin "sucks."

But on major policy solutions — from gun control, to taxes, infrastructure, health care reform and foreign trade — the two could not have been further...

Read full story
Some content from this outlet may be limited or behind a paywall.
See full media bias rating for The State
From the Left
6612
Bridging Divides
Bernie Sanders skewers Republican critic of ‘full-on socialism’ in Fox debate
The Guardian 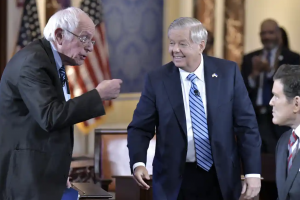 Fox News is, to put it mildly, not known for indulging progressive politics – but the rightwing news channel gave it a go on Monday, when Bernie Sanders appeared in a debate on the network’s sister channel, Fox Nation.

Sanders gave an unfettered breakdown of Medicare for all, or a national public healthcare system, a living wage, and increasing taxes on the wealthiest Americans.

For Fox viewers it was a rare opportunity to hear...