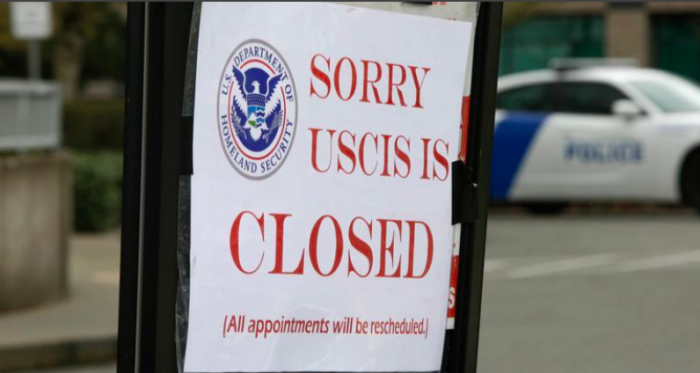 Officials with the American Federation of Government Employees (AFGE), the largest federal employee union in the country, said Tuesday that more than 13,000 federal workers at U.S. Citizenship and Immigration Services (USCIS) face a possible furlough of at least 30 days.

Nearly three-quarters of the USCIS workforce will be affected by the possible furlough, and notices will reportedly be handed out to USCIS employees between Wednesday and July 3, The Washington Post reported. The furlough itself is expected to go into effect August 3.

In an effort to prepare officers for upcoming nationwide raids on undocumented immigrants, ICE officials announced Thursday that they would be sending agents...

17th immigrant dies in ICE custody, twice as many as last fiscal year

More than twice as many immigrants have died in the custody of Immigration and Customs and Enforcement this fiscal year than last after two detainees died this...

WASHINGTON/NEW YORK (Reuters) - U.S President Donald Trump is powering ahead with his anti-immigration agenda, even as voters say they are more concerned with...

Some of the starkest partisan divides on political values are seen in views about race and immigration: Democrats are substantially more likely than...

The first full fiscal year of the Trump administration saw large increases in the number of people arrested and criminally prosecuted for immigration offenses...

When Hispanics in the U.S. were surveyed last year, shortly before the inauguration of Donald Trump, about half said they worried that they or someone they...

Federal agents in Bend, Ore., clashed with hundreds of protesters late Wednesday night after an hourslong standoff sparked by the arrest of two men by U.S....

The United States must adopt an immigration system that serves the national interest. To restore the rule of law and secure our border, President Trump is...

In May of 2019, Kamala Harris unequivocally told CNN’s Jake Tapper that she would make no distinction between American citizens and illegal immigrants on a...

Illegal immigration has come to a screeching halt thanks to a wall of screeching moms. President Trump saw videos of the Portland moms on Twitter and quickly...