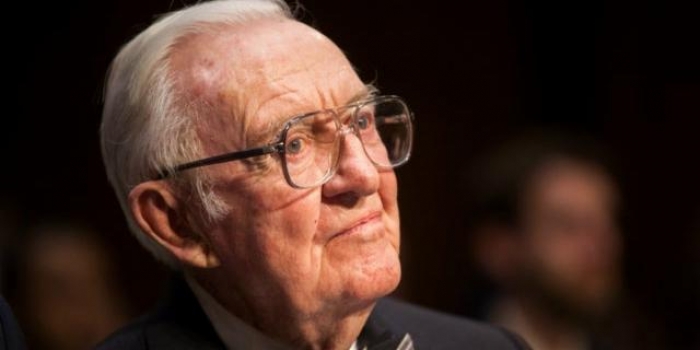 Former Supreme Court Justice John Paul Stevens, a leading liberal during his time on the high court, died Tuesday night at the age of 99, the Supreme Court announced.

In a statement, the Court said Stevens died at a hospital in Ft. Lauderdale, Fla., due to complications following a stroke he suffered on Monday.

Stevens spent 35 years on the Supreme Court after he was nominated by then-President Gerald Ford in 1975. He saw seven different presidents and...

The justices upheld regulations from the Trump administration that allowed employers with religious objections to decline to provide contraception coverage...

“In 2017, the Trump administration issued new rules that expanded an exemption from the [contraception] mandate to allow private employers with religious or...

On Monday, “the Supreme Court unanimously rejected two challenges to the constitutionality of so-called ‘faithless elector’ laws, which penalize or remove...

The Supreme Court in a split decision on Thursday granted New York state prosecutors access to President Trump’s tax returns, even as it shielded a trove of...

The U.S. Supreme Court has made it more difficult for women to get access to birth control as part of their health plans if their employer has a religious or...

The U.S. Supreme Court on Monday refused to free “electors” in the complex Electoral College system that decides the U.S. presidency from state laws that use...

The Supreme Court ruled Thursday a New York district attorney can obtain President Trump’s financial documents in a criminal probe. The ruling was 7-2....

The Supreme Court held that state laws which seek to punish presidential electors who break their pledge of support to certain candidates do not violate the...