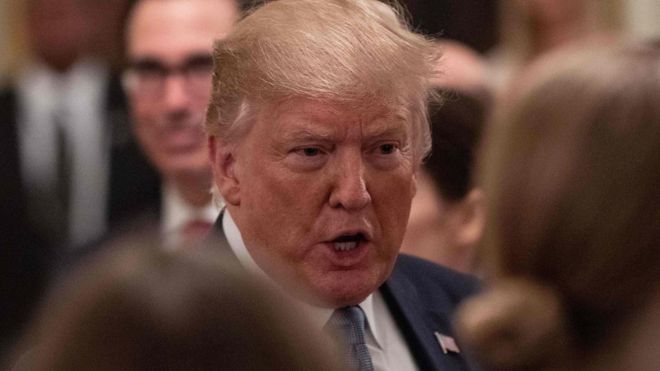 The UK's "wacky" ambassador to the US is "a very stupid guy" Donald Trump has said, amid a row over leaked emails.

This came after Downing Street reaffirmed its "full support" for Sir Kim Darroch.

On Sunday emails revealed the ambassador had called the Trump administration "clumsy and inept".

Sir Kim will now no longer meet the president's daughter Ivanka Trump as scheduled on Tuesday, the BBC has been told.

A spokesman for Theresa May said that Sir Kim is "a dutiful, respected government official" and confirmed there are no...

NEWS
Mike Pompeo, Donald Trump and the inspector-general purge: Why this is so dangerous
Salon

Mike Pompeo, Donald Trump and the inspector-general purge: Why this is so dangerous
ANALYSIS

Never let it be said that the Trump administration can't walk and chew gum at the same time. Even as the president's minions work overtime to botch every...

Coronavirus Assumed White House Would Be Bigger In Person
HUMOR

WASHINGTON—Underwhelmed by the cramped bathrooms and overly crowded seating areas, sources close to the coronavirus confirmed Tuesday that it had always...

The brouhaha over President Trump and Vice President Pence appearing at hospitals, factories and nursing homes without masks — despite Centers for Disease...

A day after President Donald Trump confirmed that he planned to wind down the White House coronavirus task force, the president announced Wednesday that it...

The Obama administration walked incoming Trump administration officials through a hypothetical scenario in which a pandemic worse than the 1918 Spanish flu...

With coronavirus exposure arriving in the West Wing, the White House is taking extra precautions to ensure the safety of the president and his staff after two...

President Trump has ousted another inspector general, the fourth IG in the last six weeks. This time, Steve Linick of the State Department was cashiered. The...

During an interview with Maria Bartiromo on Fox News Business on Thursday, President Trump claimed: “when I closed the border to China, [Dr. Anthony Fauci]...

Rate Bias
White House
Coronavirus in the White House: Is the President At Risk?

Trump administration officials say Vice President Mike Pence will be at the White House today despite an earlier report he would be working from home and self-...

The coronavirus continues to circle uncomfortably close to the White House. Ivanka Trump’s personal assistant has reportedly tested positive for the...

President Trump on Wednesday said the coronavirus task force would continue “indefinitely” but would shift its focus to safely re-opening the country amid the...