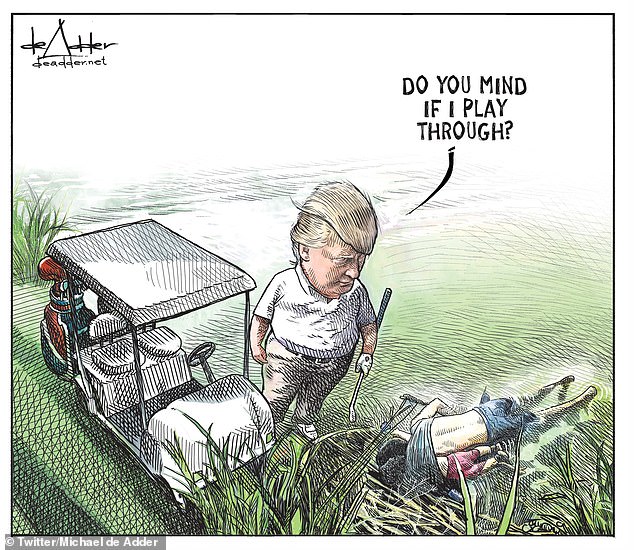 A Canadian cartoonist has been fired after an illustration he drew of President Donald Trump standing over the bodies of two drowned migrants went viral.

The company has since terminated his contact after the drawing went viral on social media, however the firm has said it was not specifically because of the illustration.

The cartoon, posted on de Adder's Twitter account on June 26, shows Trump standing beside a golf cart together with his...

NEWS
All the free speech money can buy
The Week - Opinion

Former FBI agent Peter Strzok is claiming the government violated his First Amendment rights by releasing his private text messages that contained his...

Three San Diego County universities have been flagged by a free speech advocacy group, which warned that the campuses had policies too subjective and ambiguous...

Trump’s Executive Order and the Rise of Anti-Semitism
OPINION

In 2019, Donald Trump issued not one, but two executive orders meant to push back at what he sees as political correctness on campus. Both were poorly drafted...

Free speech for me, not for thee: The real problem with debate on college campuses
OPINION

Internet companies have fought for the provisions in the USMCA deal with Canada and Mexico. House Speaker Nancy Pelosi is pushing to strip out sweeping...

In an interview with the New York Times' editorial board, former Vice President Joe Biden made his most stringent call yet for cracking down on free speech on...

The political spotlight is focused on Iowa right now as it will hold the nation's first presidential contest in less than a month. One of the state's leading...

A University of North Carolina at Chapel Hill professor recently called free speech racist and said he worries that if a Democratic presidential candidate wins...

Catherine West Lowry is a senior lecturer at the University of Massachusetts Amherst. For the past 13 years, she has taught introductory accounting—a "dry and...

UPDATE: With his son-in-law and senior advisor Jared Kushner hovering inches behind him, President Trump signed an executive order Wednesday that interprets...