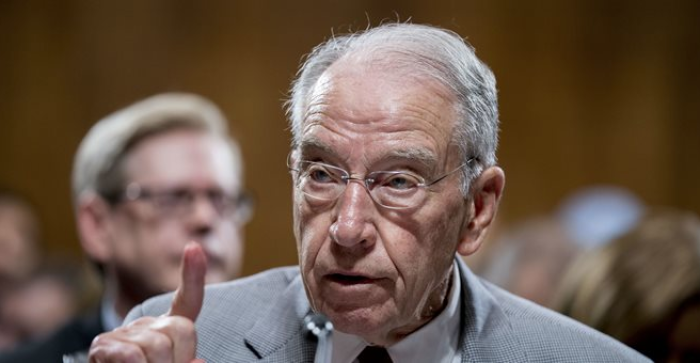 As the Senate began reviewing the FBI’s completed report on Judge Brett M. Kavanaugh on Thursday morning, both Judiciary Committee Chairman Charles E. Grassley and the White House stood by President Trump’s Supreme Court nominee, saying the investigation found nothing sufficient to corroborate allegations of sexual misconduct while he was a teenager.

John Roberts has had enough of Trump's bad faith
OPINION

In joining with the Supreme Court's four liberal justices to block Trump administration plans to end the Deferred Action for Childhood Arrivals, or DACA,...

President Trump and presumptive Democratic presidential nominee Joe Biden have both made shaping the Supreme Court’s agenda central to their campaign pitches,...

The Supreme Court on Thursday blocked the Trump administration's attempt to end the Deferred Action for Childhood Arrivals, an Obama-era program that protects...

The winners at the Supreme Court this week were the nation's LGBTQ community and undocumented immigrants. The losers were conservatives, led by President...

In a 5-4 ruling that affects more than 600,000 immigrants who were brought to the U.S. as children, high court says administration didn’t provide sufficient...

The U.S. Supreme Court on Monday turned away a challenge to President Donald Trump's tariffs on imported steel brought by an industry group that had argued...

Knock, knock. Who’s there? Unelected leftist politicians in robes with lifetime tenure. Turns out, the Supreme Court is a joke, and the punchline is Chief...