Nine months into the Ukraine War, the latter-half of which has seen a number of set-backs and retreats from the Russian military, the conflict is entering a new stage as the winter months approach Eastern Europe. Russian missiles are striking critical Ukrainian infrastructure and damaging utility services in major cities, leaving many areas without access to electricity, running water, and heating.

Key Quotes: The U.S. ambassador to the U.N stated that Russian President Vladimir Putin is “weaponizing winter to inflict immense suffering on the Ukrainian people. He has decided that if he can't seize Ukraine by force, he will try to freeze the country into submission.” Belarusian President Alexander Lukashenko told Russian media that “everything is in Ukraine's hands now. If they don't want to perish, they have to stop.” The Associated Press quoted Alina Dubeiko, a Ukrainian citizen who lost power during a missile strike, stating, “nobody will compromise their will and principles just for electricity.”

For Context: In Kherson, which was retaken by Ukrainian forces earlier this month, a missile barrage on Thursday killed 10 civilians, according to the Kherson governor. Fox News reported that 70% of the Ukrainian capital of Kyiv was without power on Thursday morning.

How the Media Covered It: The consensus across the spectrum is that the Russian military is targeting infrastructure in an attempt to weaken the morale of Ukrainian civilians and pressure the Kyiv government into negotiations and concessions. AP called it “a bid to tighten the screwon Kyiv.”

European officials are scrambling to help Ukraine stay warm and keep functioning through the bitter winter months, pledging Friday to send more support that will mitigate the Russian military’s efforts to turn off the heat and lights.

Nine months after Russia invaded its neighbor, the Kremlin’s forces have zeroed in on Ukraine’s power grid and other critical civilian infrastructure in a bid to tighten the screws on Kyiv. Officials estimate that around 50% of Ukraine’s energy facilities have been damaged in the recent strikes. 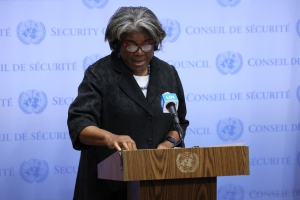 Linda Thomas-Greenfield, the U.S. ambassador to the U.N., has stated that Russia's missile attacks on the Ukrainian power grid aim to freeze the Eastern European country "into submission," while Belarusian President Alexander Lukashenko warned that Kyiv has to put an end to the war if "they don't want to perish."

Thomas-Greenfield said during a security council meeting to discuss the attacks on Ukrainian infrastructure Wednesday that Russian President Vladimir Putin insists on reducing Ukraine's energy facilities to "rubble" as the war rages.

"Putin's motive could not be more clear and... 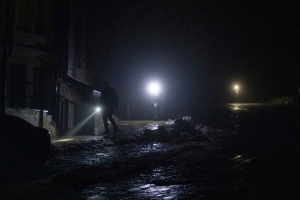 The Ukrainian capital city of Kyiv is in survival mode after a brutal series of Russian aerial attacks left most citizens without power, drinkable water, or both.

About 70% of the city was left without power on Thursday morning after Russia's latest missile barrage, officials said.

Ukrainian President Volodymyr Zelenskyy said Thursday the restoration process in the capital and other affected areas continues and that officials are focused on "gradually restoring electricity, heat, water supply and communication."

"The most difficult situation is in the Kyiv, Kirovohrad, Dnipropetrovsk, Lviv, Poltava and... 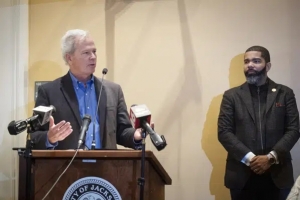