On Friday, Russian President Vladimir Putin will formally annex the 4 Ukrainian regions of Luhansk, Donetsk, Zaporizhzhia and Kherson from Ukraine. In an announcement made on Thursday, the Kremlin stated that Putin would sign "accession treaties" at the Grand Kremlin Palace that day, though Russia does not fully control these regions politically or militarily. After five days of voting, however, Moscow-installed regional officials are claiming a monumental show of support for this seizure of Ukrainian property, while Ukraine and the West are condemning the "sham" referendum.

This move comes in defiance of stern international warnings, including from the United States, and could close the door on diplomacy for a number of years. It will certainly escalate the war in Ukraine, with Kyiv insisting it will continue to fight to reclaim its territories, and Western allies promising additional economic assistance and more weapons. Putin has already raised fears of a long conflict with NATO, with the sabotage this week of two Nord Stream natural gas pipelines in the Baltic Sea, his intention to deploy 300,000 additional troops to Ukraine, and his threat of the use of nuclear weapons to defend Ukrainian territories absorbed into Russia.

Sources from across the political spectrum are covering the latest moves by Russia. 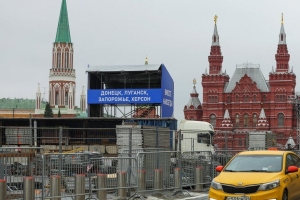 Russia's Vladimir Putin will hold a signing ceremony on Friday formally annexing four more areas of Ukraine after self-styled referendums condemned by Ukraine and the West as a sham.

So-called votes were held in Luhansk and Donetsk in the east, and in Zaporizhzhia and Kherson in the south.

The Russian president will make a major speech at the Kremlin.

A stage has already been set up in Moscow's Red Square, with billboards proclaiming the four regions as...

The signing ceremony, to take place in the Grand Kremlin Palace on Friday, marks Putin’s attempt to annex the regions of Donetsk, Luhansk, Kherson and Zaporizhzhia, even though Russia does not fully control any of them either militarily or politically.

The move, in defiance of stern international warnings including from President Biden, potentially slams the door on diplomacy for years to come, and almost certainly assures...

Russian President Vladimir Putin on Friday will officially begin annexing four more regions in Ukraine in a signing ceremony following the conclusion of self-run referenda this week that the West and Kyiv have decried as a sham.

Kremlin spokesman Dmitry Peskov said Thursday the ceremony would take place in Moscow "on agreements on the accession of new territories into the Russian Federation," first reported Reuters.

The "agreement" will apparently be signed "with all four territories that held referendums and made corresponding requests to the Russian side," he added.