In the Russian-occupied portions of Ukraine, referendums are being held by Moscow-backed regional governments to vote on joining the Russian Federation. The Ukrainian government and the bulk of Western countries have denounced the referendums as fraudulent, illegal, and conducted under undemocratic circumstances.

Reports from the regions back these sentiments, with an article from CNN stating that voting on the issue is being “effectively carried out at gunpoint” by Russian-backed separatists and invading Moscow forces. Results from each region’s vote are expected to be announced gradually in the next week, but most outlets are already predicting the vote to overwhelmingly favor joining Russia on account of the performative nature of the referendum. The decision to hold the referendum mirrors previous strategies from the Kremlin. A similar vote was held on the Crimean Peninsula in 2014 and used to justify Russian occupation of the Ukrainian land.

The referendum comes as Russia works to reclaim their footing and bolster support for their invasion of Ukraine. Earlier this week, Russian President Vladimir Putin announced a partial mobilization of the country, which resulted in protests across the country and increased border crossings out of Russian territory.

The ongoing referendums are being covered widely by international outlets and mildly domestically. Coverage across the spectrum frames the voting as illegitimate and forecasts the results to be not indicative of public opinion and predetermined by Russian officials.

Russia’s sham elections began in occupied Ukrainian territory Friday — long predicted “referendums” as to whether the pieces of sovereign Ukraine should be considered Moscow’s.

The votes — orchestrated by the Kremlin as Russia loses territory on the battlefield — are the first steps in an expected annexation of Ukrainian territory, and have widely been denounced as frauds by Kyiv and the West.

Voting began Friday in the occupied provinces of Luhansk and Kherson, as well as in the portions of Donetsk and Zaporizhzhia provinces that are under Russian control. 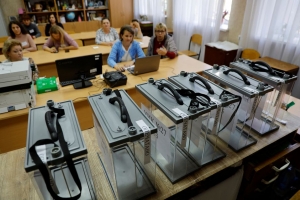 Voting began on Friday in four Ukrainian regions mostly held by Russian forces, the start of a plan by President Vladimir Putin annex a big chunk of Ukraine in what the West says is violation of international law that significantly escalates the war.

After nearly seven months of war that has killed tens of thousands and left some eastern cities of Ukraine wastelands, Putin signalled he will annex the regions if the people in the Russian-controlled areas vote to join Russia.

The voting, which the West and Ukraine says is... 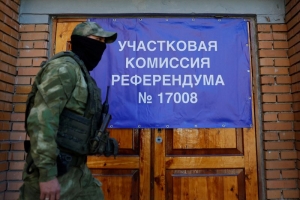 Four Russian-occupied areas of Ukraine began voting in referendums on joining Russia, according to their separatist leaders, in a move that raises the stakes of Moscow’s invasion seven months after fighting began.

The referendums, which are illegal under international law and dismissed as “a sham” by Western governments and Kyiv, could pave the way for Russian annexation of the areas, allowing Moscow to frame the ongoing Ukrainian counteroffensive as an attack on Russia itself.

Such a move could provide Moscow with a pretext to escalate its faltering war, which has...