The Supreme Court of the United States has denied review to Boise, Idaho for its appeal of a homeless ticketing case. The Ninth US Circuit Court of Appeals had ruled that Boise's policy of ticketing homeless citizens sleeping in public spaces violated the Eighth Amendment, which prohibits "cruel and unusual punishment." The Supreme Court denying to review Boise's appeal means that municipalities in other states will have to abide by the Court of Appeals' decision as well; Boise's ordinance had been in place since 1922.

Both left-rated and right-rated outlets tied their reporting to current events in California, the state with the largest homeless population. 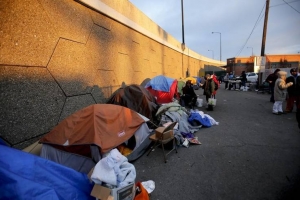 The United States Supreme Court will not take up Boise’s appeal in the case of Martin v. Boise, which addresses whether the city can ticket homeless people for “camping” in public, filings showed Monday.

Advocates for people who are homeless considered the decision a victory as news came down. Theane Evangelis, Boise’s lead counsel on the case, disagreed, saying in a statement that “the Ninth Circuit’s decision ultimately harms the very people it purports to protect.”

Read full story
Some content from this outlet may be limited or behind a paywall.
See full media bias rating for Idaho Statesman
From the Left
8695
Housing and Homelessness
Supreme Court won't revive law allowing Boise to ticket homeless who sleep on sidewalks
CNN (Online News)

Washington (CNN)The Supreme Court on Monday let stand a lower court opinion that struck down a Boise, Idaho, law aimed at the homeless that regulates camping and sleeping in public spaces.

In an unsigned order with no noted dissents, the court declined to take up Boise's appeal to reinstate its law allowing officers to ticket individuals sleeping and camping on sidewalks and parks.
The city argued the ordinance was necessary to "ensure that these areas remain safe, accessible and sanitary."

The U.S. Supreme Court refused on Monday to hear a case from Boise, Idaho challenging a lower court ruling that permits homeless people to sleep on sidewalks and in public parks if there is not enough shelter space to house them.

The Supreme Court’s decision not to hear the case – which came without comment or a dissent – is a major win for homeless activists, but a blow to city officials across the west who argue that the ruling by a federal appeals court last year hinders their abilities...

National rent is over $2,000 per month for the first time in U.S. history
Deseret News