Russia launched a "special military operation" in Ukraine Thursday, sending Russian troops and tanks flowing into the country as explosions were reported across major Ukrainian cities.

Multiple Russian missile strikes have been reported in Ukraine’s capital of Kyiv, as well as in other cities such as Dnipro, Kharkiv and Mariupol. Ukraine's government called it "full-scale war," and the head of NATO said it was a "brutal act of war." President Joe Biden said Russia "has chosen a premeditated war that will bring a catastrophic loss of life and human suffering," and more sanctions from the U.S. are expected Thursday. In announcing the operation, Putin called on Ukrainian troops to lay down their arms and maintained that Russia didn't plan to occupy any Ukrainian territories, but threatened "consequences that you have never experienced in your history" for anyone who tries to interfere.

The news was the top story from most outlets across the political spectrum Thursday. Reports about casualties are conflicting; Ukraine's defense ministry says no troops have been lost, but multiple reports across the spectrum say up to 40 people have been killed in the attacks. 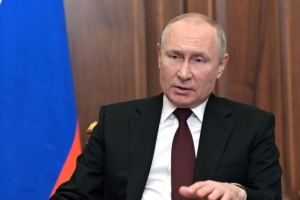 Putin said in an emergency address on Russian TV that the military operation is intended to protect civilians and to demilitarize Ukraine, and is a response to threats coming from Ukraine.

He said that Russia doesn’t plan to occupy Ukraine and said that the Ukrainian military should “immediately lay down its arms.”

Putin also said that any foreign attempt to interfere with Russia’s action will trigger an immediate reaction from Russia, and will lead to “consequences they have not seen before.”

Read full story
Some content from this outlet may be limited or behind a paywall.
See full media bias rating for The Epoch Times
From the Left
314
World
Russia attacks Ukraine; conflict reverberates around globe
Associated Press 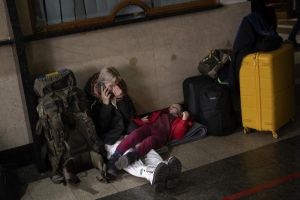 Russia launched a wide-ranging attack on Ukraine on Thursday, hitting cities and bases with airstrikes or shelling, as civilians piled into trains and cars to flee. Ukraine’s government said Russian tanks and troops rolled across the border in what it called a “full-scale war” that could rewrite the geopolitical order and whose fallout already reverberated around the globe.

In announcing a major military operation, Russian President Vladimir Putin deflected global condemnation and cascading new sanctions — and chillingly referred to his country’s nuclear arsenal as he threatened any foreign country attempting to... 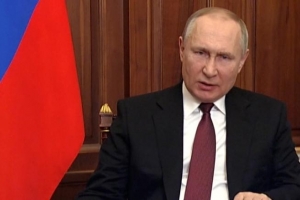 Russian forces invaded Ukraine from three sides, while explosions rang through a number of cities, including the capital Kyiv, in a broad attack that began before dawn on Thursday.

Here's how it unfolded.

Russian President Vladimir Putin made a speech early Thursday morning, saying he had decided "to conduct a special military operation ... to protect people who have been subjected to abuse and genocide by the Kyiv regime for eight years," repeating a baseless claim about Ukraine's Russian-separatist-backed Donbas region.

He denied, however, that Russia was planning to occupy Ukrainian...