Russia reportedly fired missiles at an aircraft repair facility near Lviv on Friday in Western Ukraine, far from the fighting further east and just 43 miles from the Polish border.

Explosions were heard Friday near Lviv, and videos circulating on social media appeared to show black smoke rising from the facility. Lviv's mayor said several missiles struck the facility, damaging and destroying buildings but causing no casualties. The attack follows a Russian strike on the Yavoriv military base, located between Lviv and the Polish border, which reportedly killed at least 35 people. Lviv has become a hub for refugees fleeing the fighting in eastern Ukraine, as well as for many media organizations and embassies that were forced to leave the capital of Kyiv amid the Russian advance. It is also key to western Ukraine's supply lanes, which have become essential as Russia advances from the east and the south.

Sources across the spectrum, especially on the left and center, covered the missile strike prominently. Many highlighted how the strikes hit just miles from Poland and NATO territory, and warned that more attacks in the region could force NATO nations — including the U.S. — into the conflict. 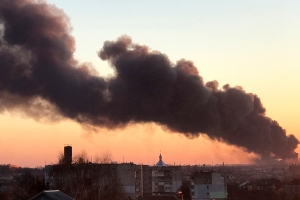 The mayor said the airplane facility was empty and there are no reported casualties so far.

The Russians launched six missiles from the Black Sea, two of which were shot down, according to the Ukrainian Air Force’s western command.

Last weekend, in nearby Yavoriv, nearly three dozen people were killed in a strike on a military training facility. Both cities are near the Polish border. 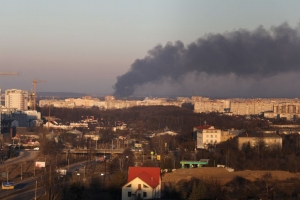 Russia fired missiles at an airport near Lviv on Friday, a city where hundreds of thousands found refuge far from Ukraine's battlefields, as Moscow tries to regain the initiative in its stalled campaign against Ukraine.

U.S. President Joe Biden was due to talk with Chinese president Xi Jinping later on Friday, in an attempt to starve Russia's war machine by isolating Moscow from the one big power that has yet to condemn its assault.

More than three weeks since President Vladimir Putin launched an invasion to subdue what he calls... 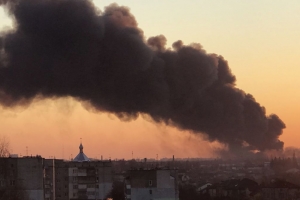 Russia launched missile strikes near an airport in Lviv on Friday, a strategic Ukrainian city not far from the Polish border that had until now largely been spared from the relentless bombardment witnessed across much of the country during the war.

Lviv mayor Andriy Sadovyi said several missiles hit an aircraft repair plant, but that work at the facility had stopped before the strikes and there were no reports of casualties.