The report wasn't covered prominently by left- or right-rated media. Subsequent coverage often concentrated on reactions from the political world. Some reports from right-rated sources highlighted pushback from the GOP lawmakers named in the report. 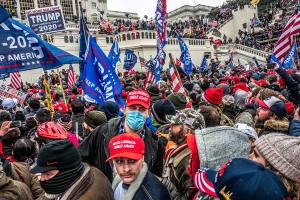 As the House investigation into the Jan. 6 attack heats up, some of the planners of the pro-Trump rallies that took place in Washington, D.C., have begun communicating with congressional investigators and sharing new information about what happened when the former president’s supporters stormed the U.S. Capitol. Two of these people have spoken to Rolling Stone extensively in recent weeks and detailed explosive allegations that multiple members of Congress were intimately involved in planning both Trump’s efforts to overturn his election loss and the Jan. 6 events that turned violent.

Read full story
Some content from this outlet may be limited or behind a paywall.
See full media bias rating for RollingStone.com
From the Center
350
Violence in America
AOC Calls for Expulsion of Any Members of Congress Involved in Planning January 6 Riot
Newsweek

Rep. Alexandria Ocasio-Cortez has called for the expulsion of any member of Congress who helped plan the storming of the U.S. Capitol after a bombshell report alleged that several Republican lawmakers had co-ordinated with rally organizers.

"Any member of Congress who helped plot a terrorist attack on our nation's capitol must be expelled," the New York congresswoman wrote in a tweet late on Sunday night.

Her comment came after a Rolling Stone report, published on Sunday night, claimed multiple members of Congress had been "intimately involved" in the planning of former President Donald Trump's efforts to overturn...

Read full story
Some content from this outlet may be limited or behind a paywall.
See full media bias rating for Newsweek
From the Right
350
Violence in America
GOP members lash out at Rolling Stone report linking them to Jan. 6 planning
Washington Examiner

A number of Republican members of Congress named in a Rolling Stone report as being involved in planning the details of rallies and electoral certification objection on the day of Jan. 6 ahead of the riot at the U.S. Capitol building, either personally or through top staff members, are pushing back on or outright refuting the story.

"No one in my office, including me, participated in the planning of the rally or in any criminal activity on Jan. 6. We did not attend or participate at all,” Texas Rep. Louie Gohmert said...

Analysis
The line of culpability for Jan. 6 needs to be more brightly drawn than it is
Washington Post