During a speech in Parliament on Tuesday, MP Phillip Lee defected from Prime Minister Boris Johnson's Conservative Party. Lee and Johnson are both Tories, yet Lee left the Conservative Party for the Liberal Democrats. Lee released his resignation letter addressed to Johnson via Twitter. The defection strips the Tories of their effective majority during a crucial time in relation to Brexit. 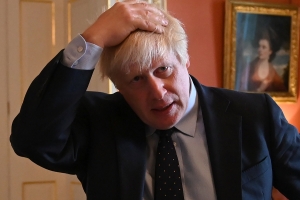 On Tuesday, less than two months from the date he set for the U.K.'s divorce from the European Union — with or without a deal on the terms of the breakup — the British prime minister suffered another significant blow to his fraying support in Parliament: Phillip Lee, a fellow Tory, defected from Johnson's Conservative Party in a dramatic scene in the House of Commons. 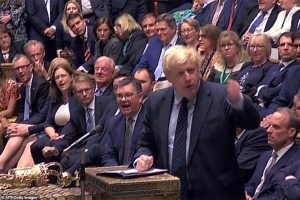 Boris Johnson called for a snap election tonight after he suffered a stinging defeat at the hands of Remainers.

The Prime Minister lost a crunch vote that gives a rebel alliance control of Commons business - with the aim of passing a law to stop No Deal.

The victory for pro-EU MPs - by a big margin of 328 to 301 - came despite Mr Johnson threatening to end the careers of Tories who joined the revolt by deselecting them.

Boris Johnson has suffered a humiliating defeat in the House of Commons as former Tory cabinet ministers banded together with Labour MPs to seize control of the parliamentary timetable.

The prime minister is poised to ask MPs on Wednesday to support an October general election after losing a vote paving the way for a rebel bill aimed at blocking a no-deal Brexit.

Brexit Is Finally Done, but It Already Seems Out of Date
ANALYSIS

LONDON — It took 11 grueling months for negotiators from Britain and the European Union to hammer out the terms of a post-Brexit trade deal. But in many...

The United Kingdom has become the first Western nation to approve a Covid-19 vaccine, a landmark moment in the coronavirus pandemic that paves the way for the...

U.K.’s Johnson in ‘Good Spirits’ and Doesn’t Have Pneumonia

What Comes Next For The Approved Brexit Trade Deal?
ANALYSIS

Lawmakers in Britain and the European Union have finally found common ground for a post-Brexit trade deal. While that clears a major hurdle, the proposed deal...

After months of talks and at almost the last minute, Britain and the European Union struck a provisional free-trade agreement Thursday that should avert New...

“Britain approved Pfizer Inc’s COVID-19 vaccine on Wednesday, jumping ahead of the rest of the world in the race to begin the most crucial mass inoculation...

A spokesman said he was moved on the advice of his medical team and was receiving "excellent care". Mr Johnson has asked Foreign Secretary Dominic Raab to...

Brexit came down to the wire but it arrived Thursday, with a new trade deal between the United Kingdom and European Union. Arguments about whether this is a...

People with “significant” allergic reactions are being warned not to get Pfizer’s new coronavirus vaccine — after two people needed treatment after being...

An image shared on Facebook over 3,200 times purportedly shows U.S. protesters throwing a statue into the water. Verdict: False The photo actually...