Perspectives: Breaking Down the Small 'Justice for J6' Rally

A demonstration in front of the U.S. Capitol Saturday was small and mostly uneventful, following concerns from some about potential violence and unrest from supporters of former President Donald Trump. Reports across the spectrum highlighted how the 100-150 "Justice for J6" attendees were far outnumbered by law enforcement, journalists and counterprotesters. Demonstrators were there in support of people arrested for the Jan. 6 Capitol riot; organizers argue that some of those charged in connection to the Capitol riot were nonviolent and were exercising their right to protest. Capitol Police reportedly made two arrests for illegal possession of weapons; they were joined in monitoring the rally by other regional police departments and the National Guard.

Concerns about violence were more common from left- and center-rated outlets leading up the rally; after the fact, coverage of the rally's uneventfulness has been more prominent in right-rated outlets. Right-rated voices often accused left-rated media outlets and commentators of greatly exaggerating concerns about the rally leading up to Saturday and questioned the lack of coverage from left-rated sources about the rally's uneventfulness. Some left-rated voices framed the rally's small size as a bad sign for pro-Trump Republicans; others on the left said despite the low turnout, the rally was dangerous and aimed to "free many of the insurrectionists of responsibility and cast them as victims." 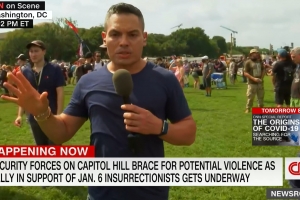 The so-called "Justice for J6" rally, a right-wing protest Saturday to support the insurrectionists facing criminal charges in the January 6 attack, was smaller than expected. It also lacked the mayhem and violence the Department of Homeland Security feared might break out.

But that doesn't mean it wasn't dangerous.

The rally in Washington, DC, was part of a dangerous attempt to rewrite the history of that dark day in America.

For months, Trump spread baseless lies about widespread election fraud, claimed the election had been "stolen," and urged his followers to take action....

Fencing around the Capitol installed ahead of the “Justice for J6” rally on Saturday started coming down on Sunday afternoon, according to footage shared by several reporters on Twitter.

"And just as fast as it went up, the fence erected around the Capitol for the 'Justice for J6' rally is now coming back down," tweeted Associated Press reporter Mike Balsamo along with a video of construction workers hauling away sections of fence. 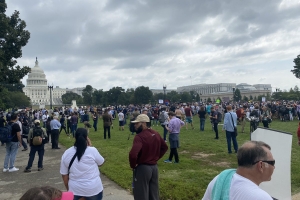 Analysts tore into the mass media who hyped the potential danger of Saturday's rally in Washington, D.C., only to find that the actual attendees were outnumbered by the police and the press.

The media frequently reported on the danger of the "Justice for J6" rally, suggesting it would be the sequel to the deadly Jan. 6 riot on Capitol Hill the day Congress intended to certify the results of the November 2020 election. A heavy law enforcement presence was put in place in hopes of preventing another violent scene. Authorities erected temporary fencing around the Capitol and...

'They start calling you Hitler': Why Disneyland has some of the most toxic fans on the...
OPINION

“This has to stop,” a Disneyland fan said. There had been a stream of troubling comments for the past few days in the “Vintage Disneyland” Facebook...

The Democratic Civil War Has a Winner: Donald Trump
OPINION

First, the good news. The government did not shut down at midnight. New covid infections in the United States have fallen twenty-five per cent over...

As citizens around the world continue to grapple with a global pandemic and the changes it has brought to their everyday lives, many are also expressing a...

A commission formed by President Biden to study potential changes to the Supreme Court expressed concerns over calls to expand the size of the court...

Police reform talks in Congress have fallen apart, as lawmakers could not strike a bipartisan deal despite the loudest calls in years to root out law...

Can there be a winner in the school culture wars?
ANALYSIS

In a typical back-to-school season, markers and poster board might be on a classroom supply list. This year, they’re also hot items for protesters attending...

The far-left fumed over an initial draft from Democrat President Joe Biden’s Supreme Court Commission on the issue of packing the Supreme Court, an idea that...

Cancel culture has reared its ugly head once again, and this time in a new and unprecedented way. A lecture by a physicist was canceled at one of America’s...