President Biden is hosting French President Emmanuel Macron at the White House on Thursday to celebrate 200 years of French-U.S. collaboration. The two world leaders are meeting amid an economic and energy crisis in Europe stemming from Russia’s invasion of Ukraine, as well as increasing tension between China and Western nations.

Key Quotes: At the welcoming ceremony, Biden called France “our oldest ally, our unwavering partner in freedom's cause,” and stated that “the choices we make today and the years ahead will determine the course of our world for decades to come.” Speaking on the Russian invasion of Ukraine, Macron emphasized the importance of the U.S.-French alliance as conflict returns to Europe, stating, “we need to become brothers in arms once more.” While the two leaders agreed on matters of geopolitics, Macron pressed Biden on the Inflation Reduction Act, which Macron fears will decrease U.S. investment in Europe and “fragment the West.”

For Context: Biden’s state dinner held in honor of Macron’s visit is the first of his presidency. France has been an outspoken supporter and financier of Ukraine’s resistance against the Russian invasion. The last time the U.S. hosted a French leader was in 2018 when former president Donald Trump hosted Macron.

How the Media Covered It: Macron’s visit is being covered across the spectrum. An article in the Associated Press outlined recent developments between the U.S. and France, including a dispute over a submarine sale to Australia.

Presidents Joe Biden and Emmanuel Macron sat down Thursday for the centerpiece talks of a pomp-filled French state visit, with the two leaders eager to talk through the war in Ukraine, concerns about China’s increasing assertiveness in the Indo-Pacific and European dismay over aspects of Biden’s signature climate law.

Biden is honoring Macron with the first state dinner of his presidency on Thursday evening, but first the two leaders met in the Oval Office to discuss difficult issues that they face.

At the top of the agenda is the nine-month-old... 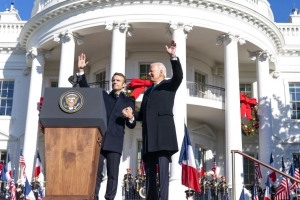 President Joe Biden welcomed President Emmanuel Macron of France to the White House for the first official state visit against a backdrop of the war in Ukraine, tensions over American trade subsidies, and China.

Invoking a “shared commitment to liberty” between the United States and France, Biden ticked through the challenges facing the two nations, including “facing down Vladimir Putin’s grasping ambition for conquest in Russia and his brutal war against Ukraine, which has once more shattered peace on the continent of Europe.”

Biden delivered his remarks from the White... 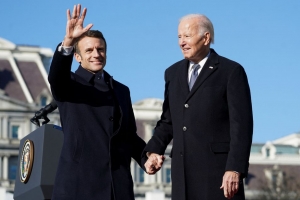 U.S. President Joe Biden welcomed French President Emmanuel Macron to the White House on Thursday to celebrate more than 200 years of U.S.-French relations and a renewed alliance in fighting Russia's invasion of Ukraine.

Biden is hosting Macron at the first state visit since the U.S. leader took office in early 2021. Biden and his wife Jill greeted Macron and his wife Brigitte with hugs, kisses and broad smiles

The two couples, who dined together informally on Wednesday, took part in a South Lawn ceremony that featured a military honor...