CNN has filed a lawsuit against the Trump administration for suspending Jim Acosta's press credentials, alleging the move violates the First Amendment. White House Press Secretary Sarah Sanders responded by saying Acosta's "attempts to monopolize the floor" cost him his pass, after initially saying it was because he pushed an intern, a claim that was widely debunked. Experts are divided over who has the stronger case: some say it was a clear violation of free speech, arguing that Trump retaliated against Acosta over the content of his questions, while others contend it was Acosta's behavior that cost him his pass and that CNN has other reporters who can cover the White House.

From the Left
1128
Free Speech
CNN is suing the White House over Jim Acosta’s press pass. Does the network have a case?
Washington Post 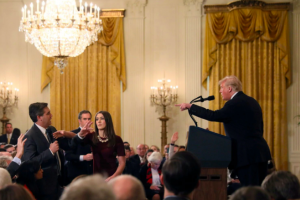 CNN filed a lawsuit against the Trump administration on Tuesday, alleging a First Amendment violation and demanding that journalist Jim Acosta’s White House credentials be restored.

Veteran journalist Bob Woodward isn't a fan of CNN's lawsuit against the White House. Speaking at a conference in Naples, Fla., the Washington Post associate editor called the lawsuit a

CNN filed a lawsuit on Tuesday against the Trump administration over the revocation of press credentials for White House correspondent Jim Acosta, a frequent target of President Donald Trump.

The pillar of internet free speech is Trump’s latest target. You may have never heard of it, but Section 230 of the Communications Decency Act is the legal...

Twitter hid a tweet from President Trump early Friday that the social media site said broke its rules on “glorifying violence,” then concealed the same tweet...

Donald Trump has threatened to “strongly regulate” or close down social media platforms that do not meet his standards for ideological balance, a day after...

Twitter has provoked outrage. But Trump is the bigger problem.
OPINION

TWITTER HAS provoked outrage for its refusal to remove disgraceful tweets from President Trump that further a baseless conspiracy theory about the death of a...

The Flip Side
Free Speech

Twitter has added a warning to one of President Donald Trump’s tweets about protests in Minneapolis, saying it violated the platform’s rules about “glorifying...

“Twitter Inc said on Tuesday it would take no action at this time on tweets from U.S. President Donald Trump about the 2001 death of a former congressional...

The Flip Side
Free Speech

As we all were last night, President Trump was watching Minneapolis descend into total anarchy. Our own Julio Rosas is there documenting the insanity. The...

Twitter censored a tweet from President Donald Trump on Thursday night where the president expressed anger at rioters in Minneapolis who were “dishonoring the...

Where would President Trump be if his critics didn’t so often help him? The latest case is Twitter’s attempt Tuesday for the first time to fact-check Mr. Trump...