World, Ukraine War, Russia
Save for Later
From The Center

Numerous explosions reportedly struck Russia's Saki military airbase, located on the western coast of Crimea, on Tuesday, leaving one dead and 13 others injured.

Russia, however, denied the officials' claims and said no aircraft were damaged. But satellite images showed at least seven fighter planes had been destroyed completely and others likely damaged, the Associated Press reported. 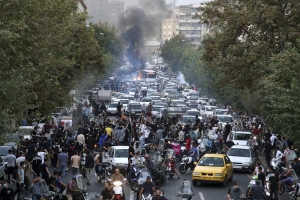 News and Information about World
Go ad-free! Support AllSides.
About these ads
https://www.ibtimes.com/ukraine-claims-9-russian-military-planes-destroyed-blasts-zelensky-calls-liberation-crimea-3600588