US House, Ethics Investigation, sexual misconduct, Matt Gaetz
Save for Later
Add to My Front Page
From The Left 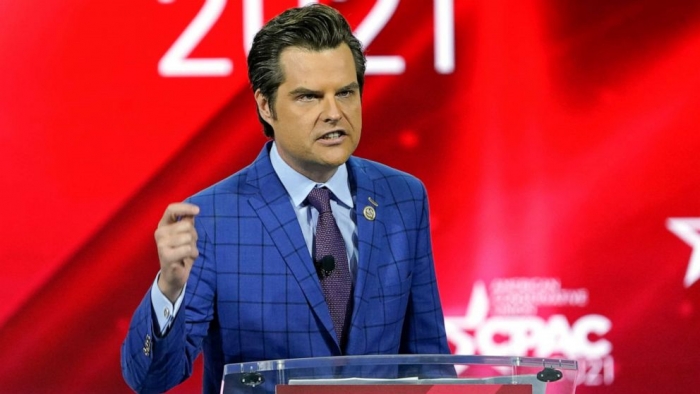 The House Ethics Committee said Friday it would open a bipartisan investigation into the wide-ranging allegations against Rep. Matt Gaetz -- an unexpected move given the open Justice Department inquiry into whether he violated sex trafficking laws and had a sexual relationship with a 17-year-old.

The inquiry will also review allegations of "sexual misconduct and/or illicit drug use, shared inappropriate images or videos on the House floor," and other allegations DOJ is probing, according to a statement released by the committee chairman.

Go ad-free! Support AllSides.
About these ads
More news about US House
https://abcnews.go.com/Politics/house-ethics-committee-opens-investigation-rep-matt-gaetz/story

Why Democratic Departures From the House Have Republicans Salivating

A growing number of Democrats in battleground districts are either retiring or leaving to seek higher office, imperiling the party’s control of the House and...

Donald Trump is effectively forcing every Republican who wants a political future to show how far they're willing to compromise on principle, truth and...

The House Republican leadership skirmish that has simmered for weeks — one that has pitted House Minority Leader Kevin McCarthy, R-Calif., against House...

What’s Next for the Most Committed Anti-Trump Republican?
ANALYSIS

Liz Cheney sees a winning strategy where none of her conference colleagues will go. On Monday morning, a political action committee for Donald Trump—a film...

The US Census Bureau announced Monday that the total population of the United States has topped 331 million people, marking the country's second slowest...

The No. 3 Republican in the U.S. House of Representatives on Monday said former President Donald Trump was “poisoning our democratic system” with his...

Political power in the U.S. will shift further to states in the South and Mountain West—with Texas picking up two House seats and California losing one—as the...

South and West to Gain Power in House of Representatives

Several states in the South and Mountain West will gain more seats in the U.S. House, boosting their political power, according to new census numbers showing...

Rep. Mondaire Jones (D-N.Y.) condemned Republican arguments against statehood for Washington, D.C., as "racist trash" in a speech on the House floor Thursday,...

The campaign arm for House Republicans is adding 10 Democratic lawmakers to its list of 47 seats held by what it considers to be vulnerable Democrats in the...

While the U.S. population grew from 2010-2020, it was at a slower rate than in any decade in nearly a century, according to new census data. Census data...

The divided House Thursday passed legislation to make Washington, D.C., the 51st state and to grant its more than 700,000 residents full representation in...

Democrats are 'so angry' with Rep. Maxine Waters they would support censure effort...

Rep. Maxine Waters (D-Calif.) is not only facing backlash from Republicans and Judge Peter Cahill for her incendiary comments related to the Derek Chauvin...