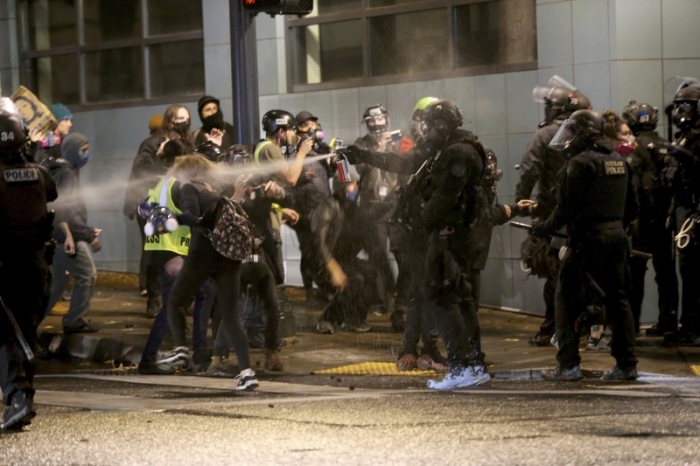 Protesters in Portland late Thursday set fire to plywood attached to the front door of a police union building in Oregon’s largest city and clashed with officers, who made 14 arrests, police said in a statement.

Images posted online showed flames erupting outside the doors of the Portland Police Association office. Some protesters managed later to get on the roof of the building, police said in a statement Friday.

The protesters who were detained were arrested on charges ranging from disorderly conduct to interfering with officers and trespassing.

Derek Chauvin, the former Minneapolis police officer charged in the killing of George Floyd, was released on a million dollar bond Wednesday. Chauvin, 44,...

The 26-year-old EMT and aspiring nurse was in her bedroom with her boyfriend when the Louisville Metro Police Department officers, in plain clothes, arrived...

For the youngsters who took to the streets of Minneapolis this summer, protests were their first political act – but many have also lost faith in the power of...

Peter Capretto is a student of empathy, literally, as a professor at Phillips Theological Seminary in Tulsa, Oklahoma. But in early 2017, when Mr. Capretto...

The Kentucky attorney general’s office released recordings of the grand jury proceedings in the Breonna Taylor case Friday, including officers’ testimony that...

Police said they knocked repeatedly and identified themselves for a minute or more before using a battering ram to enter Breonna Taylor’s apartment, according...

In Minneapolis, Rage And Fear Have Hobbled A Great American City
ANALYSIS

The one-two punch of riots over George Floyd’s death and shutdowns over the pandemic have taken a terrible toll on the City of Lakes. The intersection in...

Arming up: 1 in 5 gun-owning households have added another firearm since start of Black Lives...

Gun-owning Americans are purchasing additional firearms in response to the violent Black Lives Matter protests that have taken place in many cities and...

Hours of audio recordings from grand-jury proceedings in the Breonna Taylor case were made public Friday, giving a rare glimpse into what the Kentucky panel...

A member of the grand jury that did not indict Louisville police for Breonna Taylor's murder is now suing for the release of court transcripts and related...

Minneapolis, Minnesota’s plan to defund and then disband their local police force has “collapsed” according to a New York Times report from over the weekend....