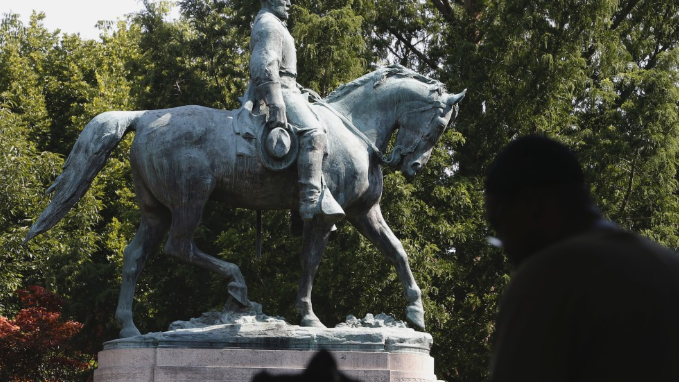 A Virginia state judge has ruled the city of Charlottesville cannot move two Civil War statues that were at the center of the riots in 2017.

After Judge Richard Moore issued his ruling Wednesday, plaintiffs that argued in defense of the statues are requesting $604,000 to cover attorney fees, plus $500 for each plaintiff.

The Charlottesville City Council voted unanimously in 2017 to move the statues after a Unite The Right rally for white supremacists led to riots and clashes between protest groups, in which one person was killed.

NEWS
Police Reform
The Flip Side

Go ad-free!   About these ads
More news about Race and Racism
https://www.washingtonexaminer.com/news/virginia-judge-rules-confederate-war-monuments-must-remain

When a Trump administration official said he doesn't think systemic racism exists in policing, many were stunned -- especially after studies have shown...

IT IS A WEEK of renewed social crisis in the United States, which means American companies are quickly lining up to pay lip service to the cause. Just like its...

Robert L. Johnson, Founder Of BET And The RLJ Companies, Issues Statement And Proposal For Full...

Is $14 trillion too much to ask for the atonement of 200 plus years of brutal slavery, de facto and de jure government-sponsored social and economic...

As millions of people across the country take to the streets and raise their voices in response to the killing of George Floyd and the ongoing problem of...

To be black and conscious of anti-black racism is to stare into the mirror of your own extinction. It happened three months before the lynching of Isadora...

The Supreme Court is considering hearing “a group of nine cases that in one way or another all challenge current qualified immunity doctrine, under which law...

Nearly six years after Michael Brown was shot and killed by a police officer in Ferguson, Missouri, the fate of George Floyd, another black man who died while...

Gov. J.B. Pritzker on Monday told President Donald Trump that he’s been “extraordinarily concerned” about Trump’s rhetoric in the wake of unrest that followed...

George Floyds and Christian Coopers are all around you — just the latest chapters in America’s long...

When Cephas Williams, a London-based artist, visited the House of Lords last year, he went through all the usual security procedures and was asked to take a...

America is under attack from three deadly viruses: COVID-19, hubris and racism
OPINION

“These are the times that try men’s souls. The summer soldier and the sunshine patriot will, in this crisis, shrink from the service of their country, but he...

It bears no resemblance to reality — not in police forces, and not in America. About twice as many white people as black people are killed by police. In fact...

It’s only been a week since the murder of an unarmed black man named George Floyd in Minneapolis, and yet it feels like a year’s worth has happened....

Riots May Be Destructive, but Abusive Policing Is Tyranny
ANALYSIS

Since the killing of George Floyd by Minneapolis police officer Derek Chauvin—assisted by three murderously indifferent cop buddies—protests over abusive and...