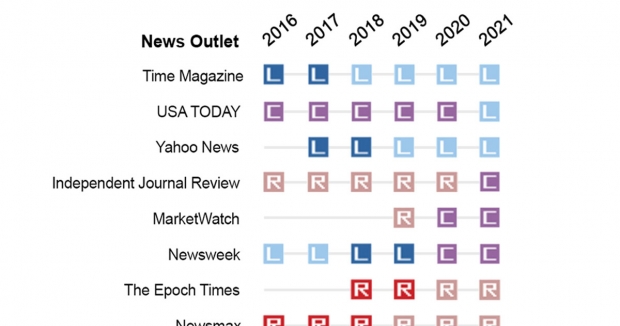 NOTE: This blog was published in 2021. To view the updated 2022 version of this blog, click here.

AllSides has been providing media bias ratings for nearly a decade. We were founded in 2012, and have rated the bias of over 800 media outlets since.

Our ratings are subject to change over time, and we frequently review outlets again to ensure the ratings are up-to-date.

Here’s an overview of how some AllSides Media Bias Ratings™ have changed over time: 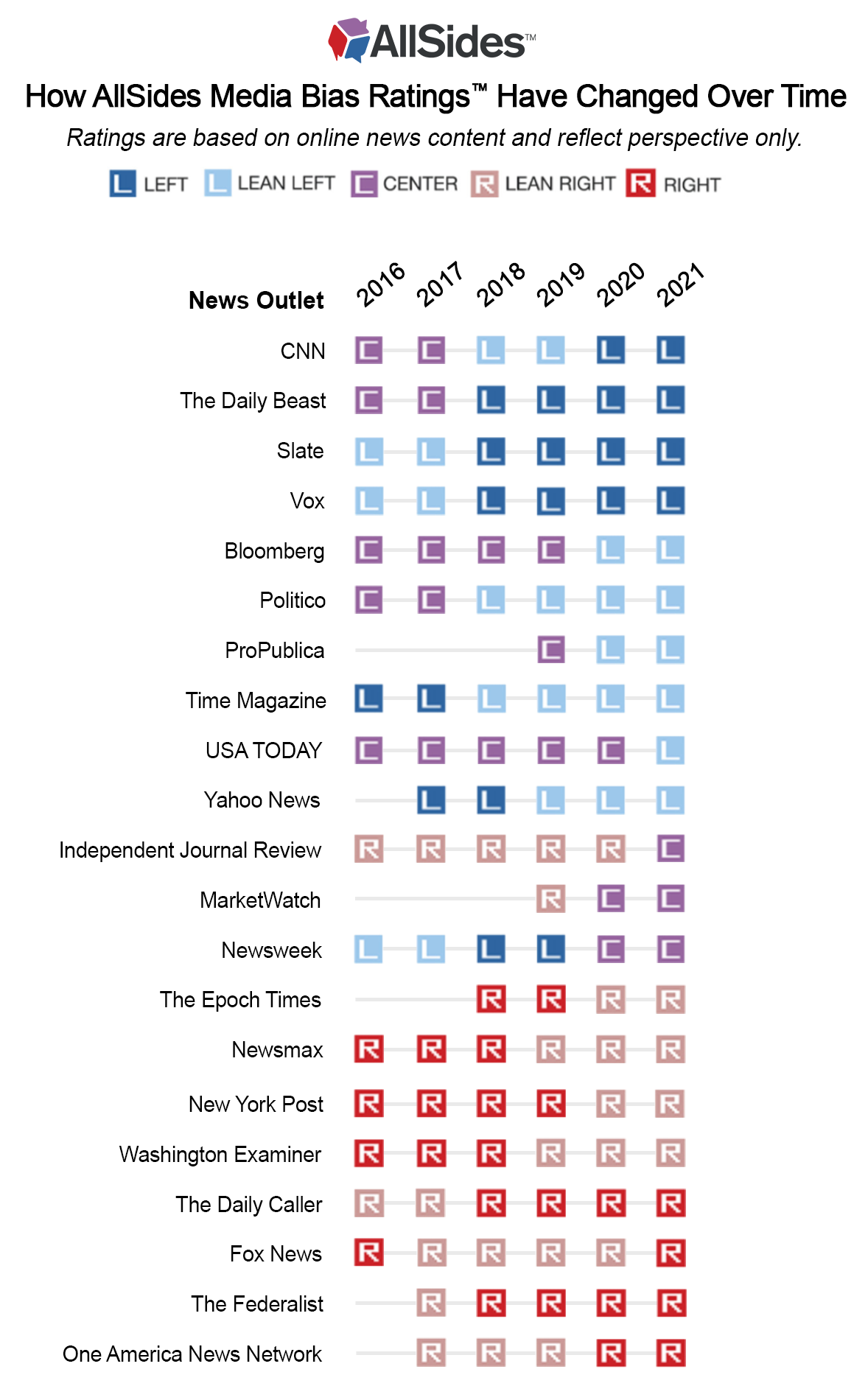 Some of the shifts are notable. For instance, from 2017 to 2021, CNN’s online news bias (we don’t rate broadcast or TV content) shifted significantly, from Center, to Lean Left, to Left. Similarly, Fox News (online news only) went from Right, to Lean Right, and back to Right from 2016 to 2021.

USA Today is another example of a media outlet that has undergone a shift in its AllSides Media Bias Rating. While USA Today was Center for many years, we shifted it to Lean Left this summer. That’s because USA Today was rated Lean Left by people across the political spectrum in an April/May 2021 Blind Bias Survey and during a July 2021 Editorial Review by the AllSides team.

Other examples of media outlets that have gone farther left over the years include ProPublica, The Daily Beast, Slate, Vox, Bloomberg and Politico.

Some have gone farther right, including The Daily Caller, The Federalist, and OAN, while others have moved toward the center, including Independent Journal Review, Marketwatch, and Newsweek. The Epoch Times’ rating was also shifted from Right to Lean Right, after a Blind Bias Survey returned a rating between Center and Lean Right, though closer to Center, and an Editorial Review returned a Lean Right rating.

AllSides uses multiple methods to rate bias, including Editorial Reviews, Blind Bias Surveys, third party data, independent research, and community feedback. Any time we shift a bias rating, it’s because the outlet has undergone one or more of these methods of review.

Of course, our ratings are not “accurate” and never can be — bias is largely subjective and in the eye of the beholder.

Someone may argue that Vox and Slate’s content never actually moved farther Left — our ratings for them in 2017 were simply wrong! Or, one may argue that USA Today isn’t really Lean Left today, but still Center.

However, the AllSides Bias Ratings™ system and patent is specifically designed to reflect the average judgment of all Americans, not just any single group, such as journalists, academics, or the company assigning the ratings. We believe this system makes our ratings the most trustworthy and credible available today.

But for someone who is on the far left, the center may seem far right; for someone who is far right, the center may seem to be far left. You may disagree with some of our ratings — that's okay! Use our ratings as additional input to form your own judgement. You can also click on the ratings on our site and on our media bias ratings page to tell us what you think the rating should be. We review this feedback and often do additional analysis if lots of people disagree with a rating.

Why does the bias of a media outlet change over time? It can be due to many factors: a change in the outlet’s ownership, a change in editorial staff, or a change in journalists. Sometimes it’s because of shifts in the broader political landscape.

For instance, AllSides found that Fox News was more Lean Right during the Trump administration, but shifted to Right after the election of President Biden, and possibly as the result of Fox News firing 16 digital editors from its Digital department in Jan. 2021 (this is pure speculation, but it does stand to reason that a change in staff could affect content). Similarly, we’ve found some media outlets were more sensationalist during the Trump administration, but have since toned down their word choice (though perhaps not enough to change their bias rating).

Our ratings and systems will continue to evolve and improve. You can always provide feedback on our media bias ratings by voting on any rating, or emailing us.

The graphic was created by Andrew Weinzierl, Research Assistant and Data Journalist.