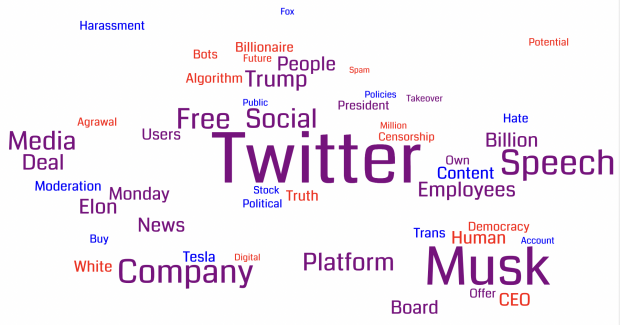 Elon Musk’s acquisition of Twitter has been dominating headlines on the left and right over the past week.

To see how the left and right covered the story differently, AllSides conducted a media bias analysis of nearly 25,000 words from 36 news stories to uncover the words that outlets on different sides of the aisle used to describe the story.

Overall, the left was more likely to be critical about Elon Musk, and were concerned that his acquisition will mean a lack of protection against false or hateful speech.

Meanwhile, the right generally sees censorship and algorithms by big tech firms like Twitter to be dangerous to freedom of speech and controlled by elite powers on the left, so they were overall more positive about the possibility of providing a more level playing field for open expression. 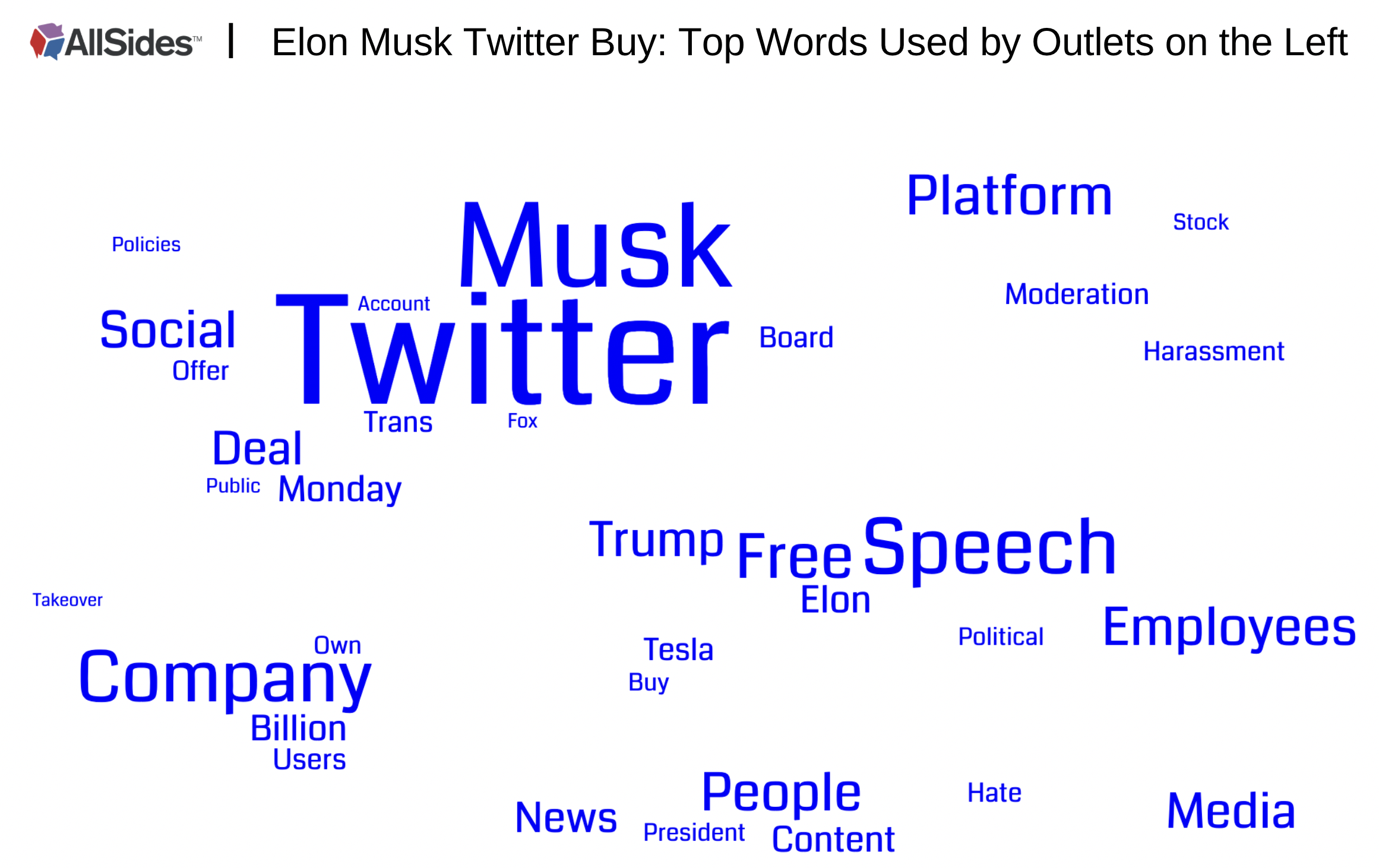 Outlets on the left mentioned Elon Musk’s company Tesla by name over twice as much as outlets on the right. One example can be seen from HuffPost (Left bias), which highlighted a Securities and Exchange Commission (SEC) settlement of $40 million after Musk was charged with securities fraud over tweets from 2018. The New York Times (Lean Left bias) and MSNBC (Left bias) also took a shot at Musk, arguing that racial discimination and harassment may be a problem under Musk’s leadership at Tesla. The right didn’t mention any of these concerns in our analysis.

Outlets on the left were much more likely to mention the words content moderation in their reporting. TIME (Lean Left bias), for example, said that Musk “insinuated that he will do away with some portion of Twitter’s content moderation policies, which protect against hate speech, incitements of violence, and targeted harassment…”.

Outlets on the left were also more likely to raise harassment and hate speech concerns about Elon Musk’s acquisition of Twitter. CNN (Left bias) noted that “some industry experts worry that Musk's desire for free speech on Twitter could mean rolling back some of the platform's work to curb hate speech, misinformation, harassment and other harmful content.” ABC News (Lean Left bias) echoed similar concerns from a technology analyst.

Other key words used more often on the left included trans (referring to some outlets’ concerns about LGBT rights on the platform under Elon Musk), buy, and political.

What Else Has The Left Said About Musk’s Acquisition of Twitter?

However, the left-rated outlet also illustrated how some liberal voices are feeling more optimistic about Musk’s takeover. Calling himself a “cautious believer,” Ezra Klein (Left bias) argued that Musk is “the only one with the power” to expose the root problems with Twitter and “right size its influence.”

Also, columnist Farhad Manjoo (Lean Left bias) noted how Twitter’s global impact has “arguably been quite negative under its current and previous management.” Manjoo doubted that Twitter under Musk “could get much more terrible than it is now,” and given the billionaire’s track record at “managing technologically sophisticated companies,” Musk “might be just the owner to unlock [Twitter’s] full potential.”

Many left-rated voices have also been concerned about the conservative memes that Musk has been sharing on Twitter since taking over the platform.

In an op-ed published by NBC News (Lean Left bias), Parker Molloy said a meme Musk tweeted about increasing partisan divides shows how he’s out of touch with “political reality.” The meme depicts the political left becoming more extreme while the political right remained in the same spot.

Molloy argued that “the right has been shifting to the extremes for decades,” which is an example of a type of media bias where journalists present subjective statements as fact. She also argued that the left has also become more progressive on certain issues such as LGBT equality, “sentencing reform and police accountability.”

“It’s not uncommon for people to delude themselves into believing that their preferred political side is the reasonable one and that it’s the other side that’s out of control,” they wrote.

The author criticized Musk for stating that he wants a “politically neutral” platform but his memes depict a seemingly “conservative vision for Twitter.” 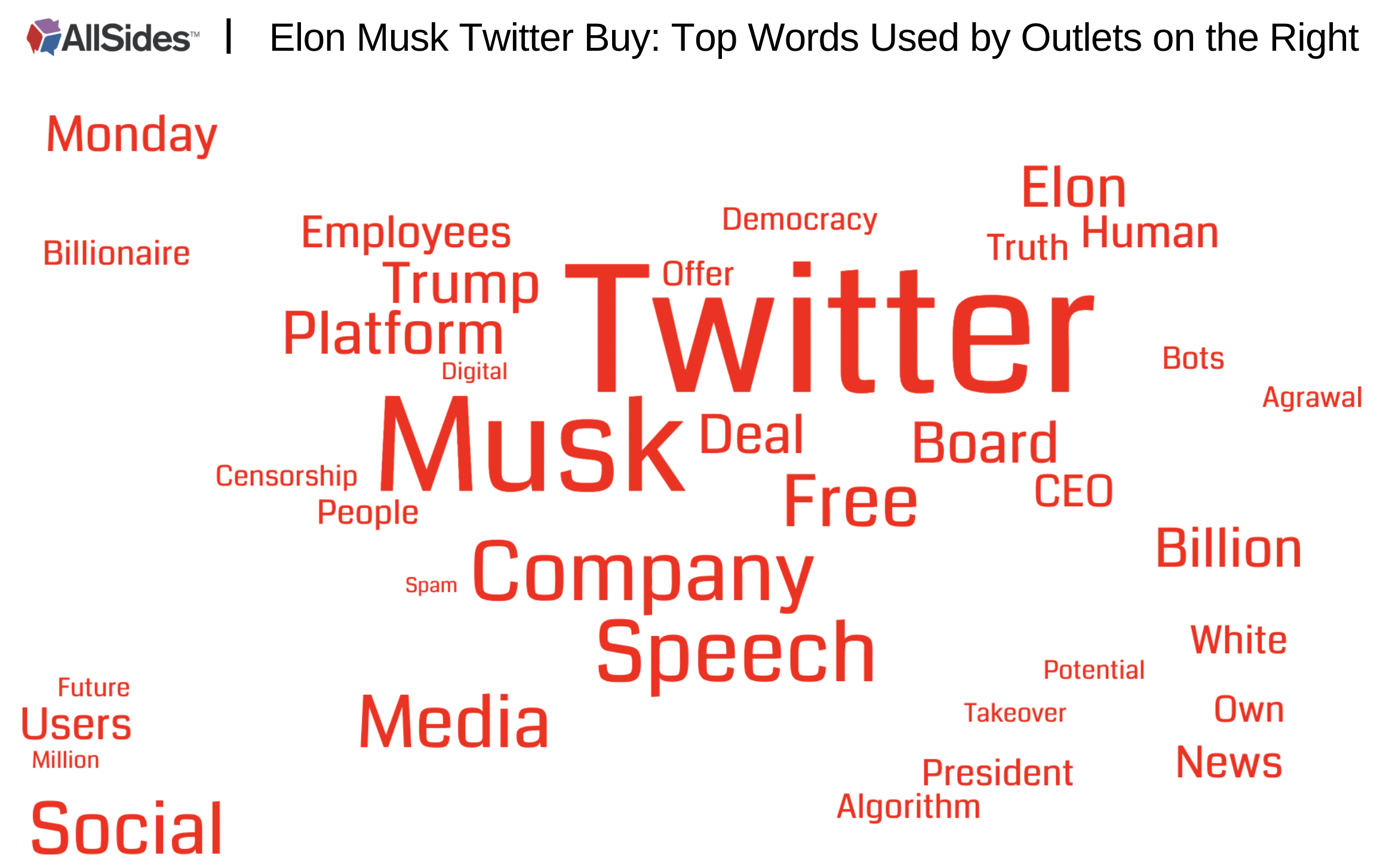 Right-rated voices have generally been much more excited and intrigued by Musk’s recent acquisition of Twitter.

Words such as human, algorithm, bots, and spam were more prevalent in our analysis. Most often, these words were found in quotes from Musk, in which he proposed improving Twitter by “making the algorithms open source… defeating the spam bots, and authenticating all humans.” Outlets on the left quoted Musk saying these words much less than outlets on the right.

We also found that outlets on the right were more likely to mention Censorship in general, describing it as a problem on the Twitter platform. The Federalist (Right bias) described Twitter as a “censorship cesspool operated by Silicon Valley elites…” and The Washington Examiner (Lean Right bias) argued that “an attitude that rejects censorship instead of embracing it” will “save democracy.”

Democracy was a word also used slightly more on the right, which most often was used in a quote of Musk saying “Free speech is the bedrock of a functioning democracy…”.

What Else Has The Right Said About Musk’s Acquisition of Twitter?

Separate from our word-analysis, we found that the editors of the New York Post – Opinion (Right bias) proclaim that Elon Musk is “good for Twitter, journalism” and “a clear win for democracy.”

“While we can’t say how the business side will work out, Musk’s track record is pretty impressive,” the outlet wrote. “And it’s sure going to be fun to watch.”

Similarly, The Wall Street Journal editorial board (Lean Right bias) said “it will be fascinating to watch Mr. Musk try to break Silicon Valley’s culture of progressive conformity.” They also emphasized how the hyperbole surrounding Musk’s takeover has been “curious, hilarious, and sometimes both.”

The National Review (Right bias) editorial board praised Musk as “Schrödinger’s billionaire” and emphasized how he strives to “construct a set of neutrally applicable rules that require people of all political viewpoints to engage with each other in a civil way.”

While Musk’s acquisition might benefit the average conservative, some analysts are suggesting that some groups on the far right might suffer. The Bulwark (Lean Right bias) writer Tim Miller argues that Musk’s takeover might be a “disaster for a couple of groups who cosmically deserve it” such as the “two-faced Trumpists and the worst MAGA scammers.”

Jordan Boyd, a staff writer at The Federalist (Right bias), proposed that Musk should “simply annihilate” Twitter altogether as the “unsalvageable” platform currently “profits off of doom-scrolling, which leads to heightened anxiety and worsening mental health.” Calling the platform “unsalvageable” is an example of spin media bias.

Fellow staff writer Emily Jashinsky agreed with Boyd that “the world would be better off without Twitter, but if we have to have it, Musk just might be able to minimize the damage” by nudging “our cultural norms in a healthier place.”

Sohrab Ahmari emphasized in The American Conservative (Right bias) that Musk won’t be able to offset the power structure in this country “that permits Big Tech firms to act as censorious publishers without any of a traditional publisher’s liability.”

Jonah Goldberg (Right bias), editor-in-chief of The Dispatch (Lean Right bias), said he’s “not sure that Elon Musk is going to pull off this Twitter thing.” He also accentuated how Musk’s takeover is the “ultimate vindication” of our society’s “obsession with the digital revolution” and how it distracted us “from pursuing greater revolutions in physical technology.”

The Return of the Free Speech Debate

Twitter will likely be undergoing significant changes over the next few years. Whether those changes are good, bad or inconsequential — and for whom — remains to be seen.

But if there’s one statement that most voices across the spectrum could agree with, it’s that Musk’s acquisition of Twitter has reignited the debate around free speech.

DIVE DEEPER: What Does Elon Musk's Buy Mean for Twitter?

It’s easier to see a clearer picture when you’re not caught inside a filter bubble of one-sided perspectives. Use our balanced newsfeed to get multiple perspectives, and get the tools to decide for yourself what you think about the issues.

In total, 14,914 words were analyzed from outlets rated left of center and 9,703 words were analyzed from outlets rated right of center. Embedded tweets were not analyzed. Only words that were used more than once (or 1.0 times) per 1,000 words analyzed from each side’s stories were included in this analysis. For example, the word “Twitter” was used 165 times – or every 17 out of 1,000 words on average – by outlets on the right. Some common words such as “said,” “this,” “of,” “it,” and “with” were excluded from the analysis.

This yielded 35 words from the left and 37 words from the right, which are shown in their respective word clouds. The larger the word in the word cloud, the more often the word appeared in the analysis. In the combined word cloud, which shows the averages of words used on both sides, the purple color represents words found in analysis from both sides; blue and red represents words found only in analysis on the left and right, respectively.