White House Press Secretary Sarah Sanders announced that CNN reporter Jim Acosta's press credentials will be suspended until further notice after he engaged in a contentious exchange with President Trump, refusing to relinquish the microphone at a press conference and shouting questions over other reporters. Sanders tweeted a video that appears to be doctored, showing Acosta pushing the female staffer's arm as she tries to retrieve the mic, which he denies happened. 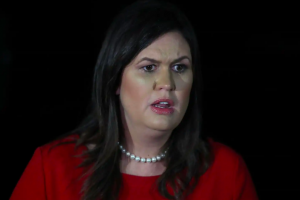 The White House has suspended the credentials of CNN's chief White House correspondent hours after a testy exchange with US President Donald Trump.

Jared Kushner’s White House office is a shrine to his own influence. Gold-framed accolades from his father-in-law hang on the walls, written in thick black...

The White House violated federal law in its hold on security aid to Ukraine last year, according to a decision by a congressional watchdog released on Thursday...

The Trump administration has maintained from the start that it ordered the assassination of Iranian Gen. Qassem Soleimani in order to forestall an imminent...

WASHINGTON — The House voted on Thursday to force President Trump to go to Congress for authorization before taking further military action against Iran, in a...

Trump Backs Away from Further Military Conflict With Iran

WASHINGTON — President Trump backed away from further military confrontation with Iran on Wednesday after a barrage of missiles fired at American troops killed...

The White House on Thursday dismissed allegations from Lev Parnas that President Trump was aware of a scheme to get Ukraine to announce investigations into his...

Pelosi set to turn over Trump impeachment reins to McConnell

U.S. House Speaker Nancy Pelosi is expected to relinquish the impeachment proceedings against President Donald Trump this week by turning the process over to...

The House of Representatives approved a resolution that would force President Trump to seek consent from Congress before taking new military action against...

The Trump administration violated the law by withholding $214 million in security assistance to Ukraine in the summer of 2019, according to a legal opinion by...

The Daily Caller
White House
Trey Gowdy: Trump impeachment trial is not about him. THIS is what Democrats want now
OPINION

Republican Senator Cory Gardner is what you would expect in a swing state like Colorado: affable, supportive of his party when it benefits his state, unafraid...

President Trump declared Wednesday that Iran “appears to be standing down,” in the wake of missile strikes on American bases in Iraq that he said resulted in “...

The Secret Service has responded to a joke from comedian George Lopez about assassinating President Donald Trump. Responding to news on Instagram that Iran...