At least 19 students and two teachers were killed Tuesday after a gunman opened fire at Robb Elementary School in Uvalde, Texas, according to law enforcement officials and Gov. Greg Abbott.

The governor also confirmed that Salvador Romas, an 18-year-old male who attended Uvalde High School, was killed by police. Two responding law-enforcement officers were shot by Romas but are said to be in stable condition. "He shot and killed horrifically and incomprehensibly 14 students and killed a teacher," Abbott said. The suspect allegedly acted alone "during this heinous crime" and killed his grandmother before entering the elementary school, according to Uvalde chief of police Pete Arredondo. White House Press Secretary Karine Jean-Pierre tweeted that President Joe Biden will address the shooting when he arrives back at the White House. "His prayers are with the families impacted by this awful event," Jean-Pierre wrote on Twitter.

“We are in mourning”: As parents awaited news, Uvalde residents processed their shock and grief
The Texas Tribune 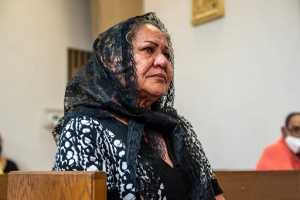 UVALDE — Dozens of families in this South Texas town, roiled by the deadliest school shooting in modern Texas history, waited for hours on the lawn of a civic center Tuesday for unthinkable news that took hours to deliver.

The building served as the reunification center for families of students evacuated from Robb Elementary School after a shooter opened fire, killing at least 19 children and two adults.

As the sun fell Tuesday, parents huddled close to their children on the lawn of the SSGT Willie de Leon Civic Center, sitting...

Families and a rallying community were mourning Wednesday after a gunman killed 21 people — including 19 children — at a Uvalde elementary school.

Officials have not publicly identified all those killed in the attack at Robb Elementary School, although by late Tuesday, families of the slain gathered at a local civic center and the victims’ names began to emerge on social media.

Gov. Greg Abbott said at a news conference one of the adults killed was a teacher; an official with the Texas Department of Public Safety told CNN that all were in...

In an appearance on NBC News on Wednesday morning, Texas Department of Public Safety (DPS) Spokesperson Lieutenant Chris Olivarez confirmed that 19 children and two teachers were killed in the shooting at Robb Elementary School in Uvalde.

Olivarez stated that the gunman shot his grandmother in a “domestic disturbance” before crashing a vehicle near the school and entering.

When local police and state troopers arrived and confronted the suspect, he returned fire and some of the responding officers were shot, per Olivarez.

“So, at that point, they began breaking windows around the...

Open on The Texan
Possible Paywall