The Republican-controlled Pennsylvania House of Representatives voted 107-85 in favor of passing a resolution to impeach the Philadelphia District Attorney, Larry Krasner (D), this past Wednesday. Proponents of impeachment are citing an uptick in crime in the city as evidence of Krasner’s failings.

Key Quotes: The resolution states that policies enacted under Krasner “have led to catastrophic consequences for the people of the City of Philadelphia.” A statement from PA House Majority Leader Kerry Benninghoff (R) stated the decision to impeach was made to put “on the record that we stand with the people of Philadelphia.” Responding to the impeachment, Krasner stated, “they have impeached me without presenting a single shred of evidence connecting our policies to any uptick in crime. We were never given the opportunity to defend our ideas and policies – policies I would have been proud to explain.”

For Context: Krasner is currently serving his second term as Pennsylvania DA. During his time in office, he has enacted a number of progressive reforms to drug-enforcement and prison sentencing. Philadelphia has seen a spike in homicides in recent years, according to the Philadelphia Police Department. The impeachment follows a trend in blue cities– San Francisco’s DA was recalled last summer. A similar recall effort in Los Angeles failed to make it to the ballot.

How the Media Covered It: News of the impeachment was covered nationally across the spectrum. Breitbart News (Right Bias) noted that Krasner’s campaign received contributions from George Soros. 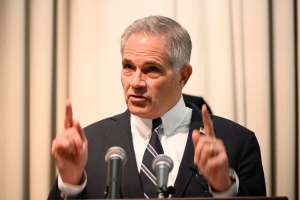 The Pennsylvania House impeached Philadelphia District Attorney Larry Krasner, as Republican legislators pushed to remove the twice-elected prosecutor whose liberal policies they blame for fueling record levels of violent crime in the city.

The Republican-led chamber impeached Mr. Krasner, a Democrat, on Wednesday by a vote of 107-85, largely along party lines, after more than two hours of emotional debate. The next step will be a trial in the GOP-led state Senate. Conviction and removal from office would require a two-thirds majority. It couldn’t be determined when a trial might... 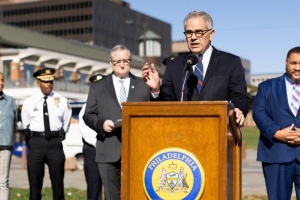 The final vote of 107-85 ran almost entirely along party lines following intense debate on the House floor, The Philadelphia Inquirer reported. Republicans currently hold a 23-seat majority in the chamber but control now hangs in the balance because of Democrat performance in the midterms.

Krasner office released a statement slamming “elected officials who do not live or vote in Philadelphia” for “trying so hard to erase the votes of Philadelphians” without presenting “a single shred... 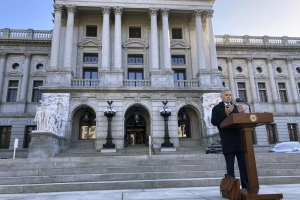 Philadelphia’s elected Democratic prosecutor faces a state Senate trial and possible removal from office after the Republican-led state House voted Wednesday to impeach him over progressive policies he has enacted amid rising crime in the city.

The move toward removing District Attorney Larry Krasner began months ago and picked up momentum in the weeks before the midterm elections, with Republicans introducing the impeachment resolution late last month. But the 107-85 nearly party-line vote marks a dramatic escalation of attacks about crimefighting policies against Democratic mayors and prosecutors that had previously...