How Accurate Are Mark Esper's Allegations Against Trump?

In his new memoir and a 60 Minutes interview that aired Sunday night, Esper highlighted a number of instances where he prevented Trump from acting on "dangerous things that could have taken the country in a dark direction." Esper claimed that Trump wanted to fire missiles into Mexico to target drug cartels and shoot protesters "in the legs" during the George Floyd protests. Additionally, the former president allegedly proposed to take military action against a number of nations including Cuba, Iran and Venezuela.

Left-rated voices were more likely to place confidence in Esper's claims and call for action. Paul Waldman and Greg Sargent argued in The Washington Post (Lean Left bias) that Democrats in Congress should hold a hearing to see if Trump "ordered a military assault on American civilians" and "determine if this episode reveals the need for institutional reforms." Also, an op-ed from The Intercept (Left bias) criticized Esper for not immediately telling the public that "the president would have them shot." Conversely, right-rated voices were more likely to dismiss Esper's allegations and his career as a whole. One Townhall (Right bias) columnist discredited all of Esper's claims and labeled him a "second-tier Trump administration hack who tries to leverage his track record of failure into a cash advance." The op-ed also proposed that the next GOP nominee "needs to make his cabinet picks known in advance" so that conservatives can "vet them," emphasizing how future administrations can't allow their agendas to be "sidetracked by bad personnel choices." 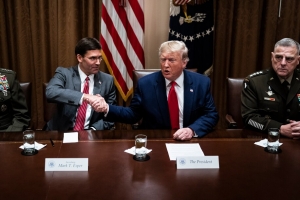 Mark T. Esper, who served Donald Trump as defense secretary, alleges in a new book that he witnessed the former president in the Oval Office suggesting that members of the military should shoot protesters “in the legs or something.” Esper suggests others were present during that meeting.

Trump denies it. He says those witnesses present would back him up.

As it turns out, this is something that Congress might investigate and try to settle, one way or the other. Will Democrats act?

The key revelation, which Esper detailed in an interview on CBS News on...

Read full story
Some content from this outlet may be limited or behind a paywall.
See full media bias rating for Paul Waldman
From the Right
12553
Donald Trump
Yawn – Yet Another Never Trump Loser Sucks Up to the Media
Townhall 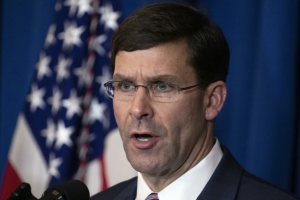 If there’s a genre that’s worn out its welcome, it’s the self-hagiographical tell-all tome by some second-tier Trump administration hack who tries to leverage his track record of failure into a cash advance and some MSNBCNN hits fielding softballs from guys best known for punishing the primate on Zoom calls. How fitting. The latest example is Mark Esper, who would be the worst Secretary of Defense ever if not for the determined competition from the current one. I would not normally name this pompous tool’s ridiculous book, but his title... 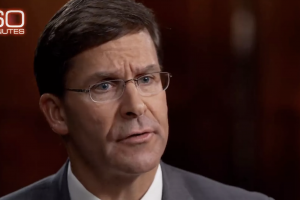 Former Defense Secretary Mark Esper told CBS in an interview broadcast Sunday he helped prevent a series of "dangerous things that could have taken the country in a dark direction" during his time in the Trump administration.

Driving the news: When CBS' Norah O'Donnell asked Esper during the "60 Minutes" interview for examples, he cited a proposal to "take military action against Venezuela," to "strike Iran" and, "at one point, somebody proposed we blockade Cuba."

Context: O'Donnell noted during the program that Ukraine was an "early source of tension" between Esper and then-President Trump....