Buckling to pressure from President Donald Trump, Israel has banned Congresswomen Rashida Tlaib (D-MI) and Ilhan Omar (D-MN) from entering the country. This over chronic criticism that Omar and Tlaib have for Israel, and their support for Boycott, Divest, and Sanctions of Israel (BDS). Dissenting with Israel, the American Israel Public Affairs Committee (AIPAC) stated that all Congress people should be allowed to visit Israel, regardless of their beliefs. AIPAC maintained its disagreement with Omar and Tlaib on Israeli issues. 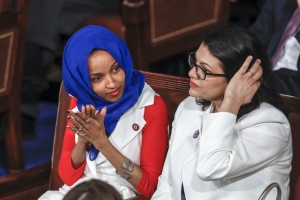 JERUSALEM (AP) — Israel said Thursday that it will bar two Democratic congresswomen from entering the country ahead of a planned visit over their support for a Palestinian-led boycott movement, a decision announced shortly after President Donald Trump tweeted that it would “show great weakness” to allow them in.

The move to bar Reps. Rashida Tlaib of Michigan and Ilhan Omar of Minnesota from visiting appeared to be unprecedented. It marked a deep foray by Israel into America’s bitterly polarized politics and a sharp escalation of Israel’s campaign against the...

Israeli officials have decided to block U.S. Reps. Rashida Tlaib, D-Mich., and Ilhan Omar, D-Minn., from entering the country as part of a planned visit, a reversal that comes amid pressure from President Trump and concerns about their support for boycotts of Israel.

The move prompted a massive outcry from Democratic lawmakers in Washington, but the Israeli government staunchly defended the decision -- suggesting the lawmakers had ulterior motives with the planned trip.

(CNN)Israel announced Thursday it was barring the entry of two US congresswomen after Donald Trump encouraged the move, a remarkable step both by the US President and his ally, Israeli Prime Minister Benjamin Netanyahu, to punish political opponents.

Deputy foreign minister Tzipi Hotovely told CNN on Thursday of Israel's decision to ban Reps. Rashida Tlaib and Ilhan Omar from entering the country. The announcement came shortly after Trump said Israel would be showing "great weakness" by allowing them to enter the country.
"The plan of the two Congresswomen is...

New Delhi, India - A tweet posted by India's governing party has triggered controversy, with the right-wing party accused of mocking a phrase used by anti-...