On Monday, the vehicle Zakrzewski was traveling in was hit by incoming fire in Horenka, a suburb near Kyiv. Zakrzewski was accompanied by Ukrainian Fox News producer Oleksandra Kuvshynova, who was also killed, and Fox News correspondent Benjamin Hall, who remained hospitalized on Tuesday. In a statement, Fox News Media CEO Suzanne Scott said Zakrzewski was “profoundly committed to telling the story and his bravery, professionalism and work ethic were renowned among journalists at every media outlet,” adding, “He was wildly popular – everyone in the media industry who has covered a foreign story knew and respected Pierre.” White House press secretary Jen Psaki acknowledged Zakrzewski’s death and esteemed career on Tuesday, saying, “Our thoughts, our prayers are with his family, with the entire community as well.” Zakrzewski was not the first American journalist to die covering Russia’s invasion of Ukraine; documentary filmmaker Brent Renaud was killed on Sunday.

Coverage of Zakrzewski’s death was prominently featured in major outlets across the spectrum. While Ukraine’s defense ministry said the journalists’ vehicle was attacked by Russian troops, coverage tended to omit the identity of the attackers by saying the vehicle simply “came under attack.” Update 9:05 PM ET: Added Oleksandra Kuvshynova's role as a Fox News producer; several outlets only referred to her as a "Ukrainian journalist." While Fox News did not mention her in its initial article about Zakrsewski, it published a separate article about her death later that day. 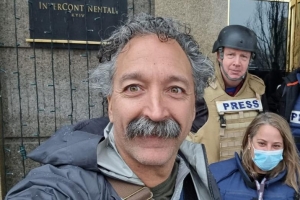 A video journalist for Fox News was killed in Ukraine when the vehicle he was traveling in outside of Kyiv with another reporter came under fire, the network said on Tuesday.

The slain videographer, Pierre Zakrzewski, 55, had covered conflicts in Iraq, Afghanistan and Syria for Fox, the network said in a memo to staff.

“His passion and talent as a journalist were unmatched,” Suzanne Scott, CEO of Fox News Media, said in the memo.

Reporter Benjamin Hall has been hospitalized since Monday, when their vehicle was hit in Horenka,... 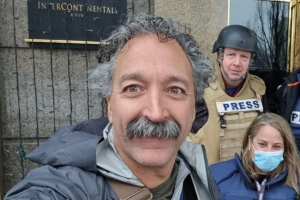 Pierre Zakrzewski, a cameraman for Fox News, was killed Monday alongside a Ukrainian colleague, Oleksandra Kuvshynova, while reporting outside Kyiv, according to statements from Fox News and Ukrainian officials on Tuesday.

Both journalists were traveling in a car Monday with Fox News correspondent Benjamin Hall in the town of Horenka when the vehicle was struck by incoming fire. The network said on Monday that Hall, a State Department correspondent, has been hospitalized with his injuries, but no further update has been given on his condition.

Read full story
Some content from this outlet may be limited or behind a paywall.
See full media bias rating for Washington Post
From the Right
13271
Media Industry
Fox News cameraman Pierre Zakrzewski killed in Ukraine
Fox News (Online News) 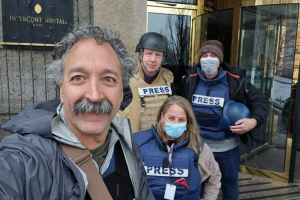