Ukraine just took its biggest step yet toward joining the European Union.

President of the European Commission Ursula von der Leyen said Friday that Ukraine should be granted candidate status for the EU. "Ukraine has clearly shown commitment to live up to European values and standards," said von der Leyen. "Ukrainians are ready to die for the European perspective. We want them to live with us the European dream." Ukraine applied to join the EU four days after Russia invaded in February. Moldova and Georgia also applied several days later. All three are ex-Soviet states dealing with separatist regions occupied by Russian troops.

If admitted, Ukraine would be the largest country in the EU by area and the fifth most populous. Von der Leyen also recommended Moldova for candidate status, but not Georgia. Joining the EU will still likely take years for both nations, and membership isn't guaranteed. Leaders of the 27 EU member states will meet for a summit next week to discuss the possible new members. Russia opposes Ukraine joining the EU, and tends to view any expansion by Ukraine on the global stage as a national security threat.

The news was covered prominently and similarly across the political spectrum. Many reports highlighted that even if Ukraine does become an EU member, it will be at least a few years before the process is finalized. 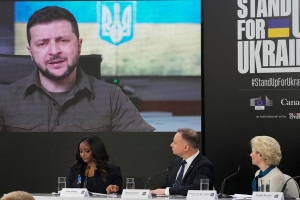 Ukraine on Friday got the green light from the executive arm of the European Union after it recommended the war-torn nation be granted "candidate status" as Kyiv seeks to join the 27-nation alliance.

President of the European Commission Ursula von der Leyen said, "Ukraine has clearly shown commitment to live up to European values and standards. And embarked, before the war, on its way towards the EU.

"We recommend to give Ukraine the candidate status, on the understanding that the country will carry out a number of important reforms," she added. 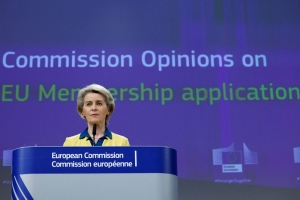 The European Union gave its blessing on Friday for Ukraine and its neighbour Moldova to become candidates to join, in the most dramatic geopolitical shift to result from Russia's invasion.

"We want them to live with us the European dream."

It was only the start of a process that could take many years, but it puts Kyiv on course... 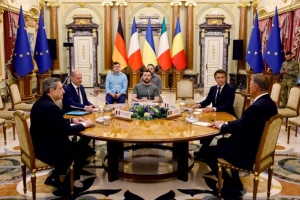 Ukraine's bid to join the European Union received a major boost on Friday morning, after the bloc's executive said it believed the country should be formally considered for candidate status in the wake of Russia's invasion.

Speaking in Brussels, the European Commission's President Ursula von der Leyen said the Commission recommends "that Ukraine is given candidate status. This is of course on the understanding that the country will carry out a number of further reforms."