House Speaker Nancy Pelosi announced the start of the House's formal impeachment inquiry into President Donald Trump Tuesday afternoon, saying his actions to date "have clearly violated the Constitution." Also on Tuesday, Trump announced he would authorize the unredacted transcript of his call-in-question with Ukranian President Volodymyr Zelensky, saying it would be published Wednesday.

All sides of the media are reporting similarly on Pelosi's and Trump's respective announcements. Many commentators, from left to right, are divided as to whether or not these grounds for potential impeachment are more or less solid than the Russia investigation. 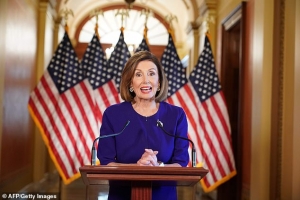 House Speaker Nancy Pelosi on Tuesday launched a formal impeachment inquiry into Donald Trump, giving into demands from her party's leading presidential candidate and her top lieutenants that Congress attempt to oust the sitting president.

Pelosi announced in a televised statement that she'd opened an umbrella for numerous congressional investigations into the Republican president who Democrats say is in willful violation of the U.S. Constitution. 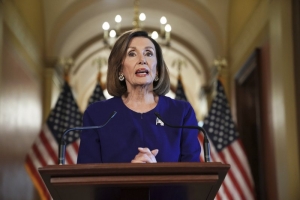 WASHINGTON (AP) — House Speaker Nancy Pelosi launched a formal impeachment inquiry against President Donald Trump on Tuesday, acquiescing to mounting pressure from fellow Democrats and plunging a deeply divided nation into an election year clash between Congress and the commander in chief.

The probe centers on whether Trump abused his presidential powers and sought help from a foreign government for his reelection. Pelosi said such actions would mark a “betrayal of his oath of office” and declared: “No one is above the law.” 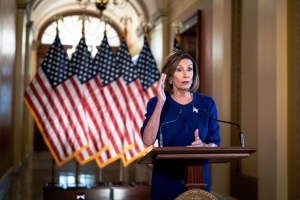 WASHINGTON — Speaker Nancy Pelosi announced on Tuesday that the House would begin a formal impeachment inquiry of President Trump, saying that he had betrayed his oath of office and the nation’s security in seeking to enlist a foreign power for his own political gain.

“The actions taken to date by the president have seriously violated the Constitution,” she said after emerging from a meeting of House Democrats in the basement of the Capitol. Mr. Trump, she said, “must be held accountable — no one is above the law.”

One day in 2015, Donald Trump beckoned Michael Cohen, his longtime confidant and personal attorney, into his office. Trump was brandishing a printout of an...

In Donald Trump’s telling of it, the result of the 2020 election, which has not been held yet—and he might even win—is not legitimate. It’s a note Trump struck...

Kayleigh McEnany has made a mockery of her promise not to lie. Tuesday’s briefing was case in point.
ANALYSIS

President Donald Trump often tells reporters that big plans of his, such as health care or immigration proposals, will be unveiled in “two weeks.” It’s a tell...

The Trump administration on Tuesday said it is reimposing its "public charge" wealth test for green cards that had been blocked during the pandemic, a move...

A new report from Citizens for Responsibility and Ethics in Washington, a non-partisan ethics watchdog that has prolifically documented alleged misconduct in...

A number of prominent Republican lawmakers addressed President Trump's refusal on Wednesday to commit to a peaceful transfer of power if he loses November's...

Trump’s $100 Million Mistake: How Retaining Ownership Of His Hotels Cost The President A Fortune

WASHINGTON, D.C., is full of monuments to presidents, but none quite like the Trump International Hotel, down the street from the White House. A bottle of...

President Donald Trump did not commit to ensuring there is a peaceful transfer of power after the presidential election in November. During a press...

‘Come in.’ Burly, brisk and maskless, Mike Pompeo indicates a chair before the marble fireplace. ‘It’s all right if we’re six feet — or two meters — apart...