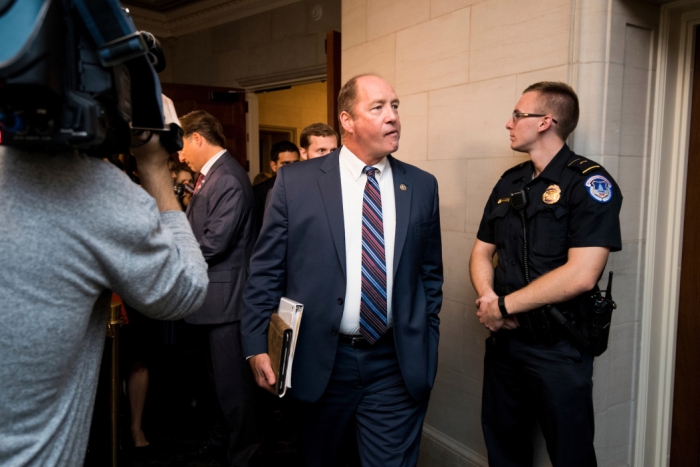 House Majority Leader Steny H. Hoyer is calling for Florida Republican Ted Yoho to be formally reprimanded on the House floor for derogatory words he allegedly said about Rep. Alexandria Ocasio-Cortez as he left the Capitol steps Monday.

During the back-and-forth centered on Ocasio-Cortez's previous comments about the root cause of crime, Yoho called Ocasio-Cortez “disgusting” and after they walked in separate directions, Yoho said “f****** b****,” The Hill reported Tuesday.

Yoho, when asked Tuesday if he would apologize to Ocasio-Cortez, said: “There’s nothing to apologize for.”

Go ad-free! Support AllSides.
About these ads
More news about US Congress
https://www.rollcall.com/2020/07/21/hoyer-wants-rep-yoho-reprimanded-for-derogatory-remarks-directed-at-rep-ocasio-cortez/

Trump’s grip on the GOP loosens ever so slightly

The 10 House Republicans who ultimately voted to impeach President Donald Trump represent a tiny fraction of the GOP conference — fewer than 5 percent. It’s...

Speaker Nancy Pelosi has called on Vice President Mike Pence and the Cabinet to invoke the 25th Amendment to immediately remove President Donald Trump from...

The next crucial step in the United States' Pony Express version of democracy is upon us -- and so is the final opportunity in President Donald Trump's...

After four years of defending and emboldening Donald Trump, Republicans in Congress on Wednesday will face their most consequential test of loyalty yet: to...

It’s one of President-elect Joe Biden’s favorite anecdotes about his formative years in the Senate. Not long into his 36-year career there, the young...

GOP in bind over Trump as corporate donations freeze

Republicans are in a bind as they consider how to move on from President Trump, who has passionate support from a large chunk of the party but has become...

Republican Rep. Elise Stefanik’s getting the boot from the Harvard Institute of Politics. The school announced Tuesday that the four-term congresswoman from...

Millions of President Trump's supporters who had the false hope that the election could be overturned by Congress were "lied to," Rep. Dan Crenshaw, R-Texas,...