USA Today has been accused of biased fact checking regarding a piece it published Saturday exploring a possible connection between Trump campaign merchandise and Nazi symbolism. The USA Today article initially rated the claim that "Trump campaign shirts feature imperial eagle, a Nazi symbol" as true, before making an update Monday morning and changing the rating to "Inconclusive".

No other center- or left-rated outlets had covered the story as of Monday night; many left-leaning voices and critics of Trump accused the president of promoting Nazi ideology in reaction to USA Today's article. Coverage and opinions from right-rated sources focused on the fact that the eagle is a symbol of many other groups and political institutions within the U.S., and accused USA Today of complicity in the purported mainstream anti-Trump media bias. 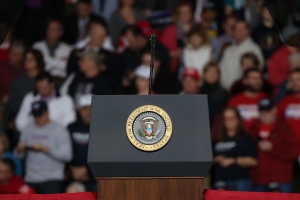 In a “fact check” published on Saturday, USA Today claimed to “confirm” rumors that President Donald Trump’s re-election campaign was selling merchandise emblazoned with a “Nazi symbol,” the “Imperial Eagle.” By Sunday night, however, after being fully embarrassed on social media, the paper walked back their claims.

The “fact check” came in response to claims made by two Twitter accounts, Bend the Curve, a left-leaning anti-Semitism watchdog account, and The Lincoln Project, a Republican anti-Trump political action group. The two organizations both noted that Trump’s campaign was selling shirts featuring...

USA Today was dragged over the weekend after publishing a “fact check” claiming the Trump campaign sold shirts featuring a Nazi symbol of an eagle, and later clarified that “the eagle is a longtime US symbol, too.”

The paper published a “fact check” claiming “Trump's campaign website recently unveiled a T-shirt that has come under fire because of design similarities between its logo and a Nazi symbol” and coming to the conclusion that the claims are “true.”

“The claims that a Trump campaign T-shirt has come under criticism for using... 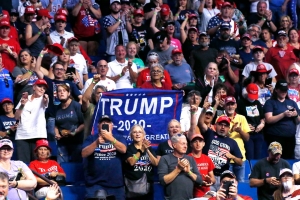 The claim: Trump campaign shirts feature imperial eagle, a Nazi symbol
President Donald Trump's campaign website recently unveiled a T-shirt that has come under fire because of design similarities between its logo and a Nazi symbol.

The similarity was first noticed, according to Forward, by two Twitter accounts, Bend the Arc: Jewish Action, described as a Jewish progressive group, and the Lincoln Project, an anti-Trump group formed by Republicans.

"The President of the United States is campaigning for reelection with a Nazi symbol. Again," Bend the Arc tweeted...

Right-wing media helped usher in the age of “cancel culture,” but now pretend it's an...
OPINION

In an op-ed plastered across Monday’s New York Post front page, Sen. Josh Hawley (R-MO) calls for an end to the “muzzling of America.” Despite getting a spot...

More than 100 Politico staffers have reportedly signed a letter to publisher Robert Allbritton over the decision to allow right-wing firebrand Ben Shapiro...

Media Have Every Right to Cancel Trump
OPINION

So, President Donald Trump has been booted off Twitter, as of now forever. Facebook also gave him the heave-ho. Apple and Google, meanwhile, have tossed the...

With liberal reporters continuing to act as no more than lapdogs for the Biden administration or attack dogs from the left, Fox News White House correspondent...