Supporters say adding the citizenship question to the US Census would help enforce the Voting Rights Act. Opponents say this would result in undercounting minorities and immigrants. 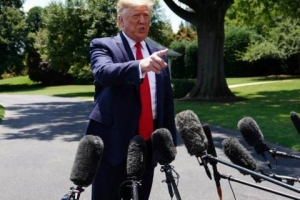 President Trump on Thursday plans to announce an executive action related to the census, according to a White House official.

The action is expected to address the citizenship question that the Supreme Court recently blocked the administration from adding to the 2020 census. Trump tweeted that he will hold a news conference in the afternoon “on the Census and Citizenship.”

White House officials declined to discuss the content of the executive action, but said it may not be a full-blown executive order.

Trump has hinted in recent days that he...

President Trump will announce an executive action to add the citizenship question to the 2020 census, two senior administration officials have confirmed to CBS News. Mr. Trump announced a White House Rose Garden press conference on the topic for Thursday afternoon.

The anticipated announcement comes as the president exhibits frustration over the Supreme Court decision that his administration failed to provide adequate justification for adding the question. Multiple legal battles over the question are still playing out in lower courts.

It isn't yet clear exactly what kind of...

The people, who asked for anonymity because the plan...

The Trump administration violated the law by withholding military aid to Ukraine, the U.S. Government Accountability Office said in a decision released...

Rudy Giuliani associate Lev Parnas was in contact with at least two major Trump campaign donors-- one with an official role in the Republican National...

‘You’re a bunch of dopes and babies’: Inside Trump’s stunning tirade against generals

There is no more sacred room for military officers than 2E924 of the Pentagon, a windowless and secure vault where the Joint Chiefs of Staff meet regularly to...

Jared Kushner’s White House office is a shrine to his own influence. Gold-framed accolades from his father-in-law hang on the walls, written in thick black...

The White House violated federal law in its hold on security aid to Ukraine last year, according to a decision by a congressional watchdog released on Thursday...

After Contentious Interview, Pompeo Publicly Accuses NPR Journalist Of Lying To Him

One day after a contentious interview that was followed by an expletive-filled verbal lashing of NPR host Mary Louise Kelly, Secretary of State Mike Pompeo is...

Now that Donald Trump has been president for three years, what has changed? Here are some things that can be measured: The economy added 6.7 million jobs,...

A federal watchdog concluded that President Trump broke the law when he froze assistance funds for Ukraine last year, according to a report unveiled on...

The White House on Thursday dismissed allegations from Lev Parnas that President Trump was aware of a scheme to get Ukraine to announce investigations into his...

Today is the day that the impeachment trial of President Donald Trump gets underway. Proceedings start around 1 p.m. in Washington (go here for places to watch...

The White House will block any attempt to summon Rudy Giuliani associate Lev Parnas to testify in the Senate impeachment trial, the Wall Street Journal...

The U.S. government’s congressional watchdog determined that the Trump administration violated the law when it withheld hundreds of millions of dollars in...

The Trump administration violated the law by withholding $214 million in security assistance to Ukraine in the summer of 2019, according to a legal opinion by...

The Daily Caller
White House
Trey Gowdy: Trump impeachment trial is not about him. THIS is what Democrats want now
OPINION

Republican Senator Cory Gardner is what you would expect in a swing state like Colorado: affable, supportive of his party when it benefits his state, unafraid...