Russia Scaling Back Kyiv Assault, Focusing on Separatist-Backed Regions in the East

Russia is scaling back its assault on the Ukrainian capital of Kyiv and other parts of the country in the face of stiff resistance, focusing instead on separatist-backed regimes in Eastern Ukraine such as Donbas.

While the siege of Kyiv has been unsuccessful, Russia is declaring that the "first stage of the operation" has been largely accomplished as strategy changes are announced.  Meanwhile, the bulk of the Ukrainian army remains in eastern Ukraine in the hope of keeping Russia from destroying their forces in the country's industrial center and possibly splitting the country in two.

Media sources from the right, left, and center acknowledge that the Russian pullback is a sign that their aspirations for a quick victory in Kyiv have failed, or at least been derailed. 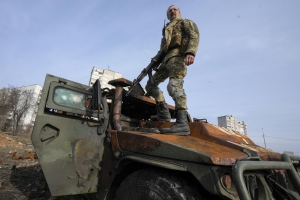 With its aspirations for a quick victory dashed by a stiff Ukrainian resistance, Russia has increasingly focused on grinding down Ukraine’s military in the east in the hope of forcing Kyiv into surrendering part of the country’s territory to possibly end the war.

The bulk of the Ukrainian army is concentrated in eastern Ukraine, where it has been locked up in fighting with Moscow-backed separatists in a nearly eight-year conflict. If Russia succeeds in encircling and destroying the Ukrainian forces in the country’s industrial heartland called Donbas, it could try... 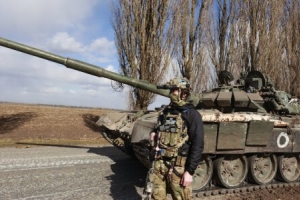 As the war in Ukraine stretches into its second month, Russia appears to be pausing its unsuccessful siege of Kyiv and has shifted its strategy to one of punishing missile strikes along with a renewed effort to cut off Ukrainian forces in the eastern Donbas region.

On Friday, First Deputy Chief of the Russian General Staff Sergei Rudsko declared the “first stage of the operation” had been completed, enabling Russian forces to move on to the “main goal” of taking full control of Donetsk and Luhansk in the east.

Read full story
Some content from this outlet may be limited or behind a paywall.
See full media bias rating for Washington Examiner
From the Left
314
World
Ukrainians disrupt and derail Russian offensive as war moves to new phase
CNN (Online News) 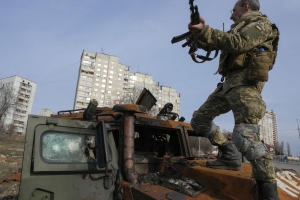 Just over a month after the first ballistic missiles slammed into Kyiv's international airport, the Russian campaign has been disrupted and derailed by stubborn Ukrainian resistance -- and in the last few days by agile Ukrainian counterattacks on several fronts.

Russian forces retain considerable -- but not overwhelming -- numerical superiority. Their armored groups have struggled against Western-supplied anti-tank weapons and Turkish-made drones. Ukrainian air defenses have punched above their weight and are now being reinforced by thousands of US-made Stinger missiles.