The Motives and Implications of Sen. Kyrsten Sinema's Independent Turn

Arizona Senator Kyrsten Sinema left the Democratic Party and is registering as an independent. The move by Sinema, who has frequently bucked and scaled back Democratic policy proposals, is not predicted to drastically upset the balance of power in the Senate but is being framed by some as an indication of increasing frustration and dissolution with the two-party system, and by others as a political plot by Sinema to retain her position against an expected Democratic primary challenge in her next election.

From the Left: Greg Sargent called Sinema’s decision “an epic gamble born of necessity,” determining it to be “her only chance at keeping her Arizona Senate seat beyond 2024.” A writer in Newsweek (Center Bias) said Sinema’s move “exposes how little she cares for the party she called home for her career—and for that party's voters,” determining that she is “fully aware of the kamikaze mission she's on” and how it will hinder both the Democratic Party and her own political ambitions moving forward.

From the Right: Many on the right praised Sinema’s move and predicted how the decision would impact the larger political stage. Quin Hillyer tied Sinema’s announcement to a broader movement of voters away from political affiliations, stating that “the public hunger remains for candidates less interested in toeing party lines” and predicting the move increasing the odds of a third-party President in the near future. Brad Polumbo (Lean Right Bias) praised Sinema and declared that “the people share Sinema's frustrations with both establishment parties.”

Sen. Kyrsten Sinema’s surprise announcement that she is registering as an independent is an epic gamble born of necessity. It’s probably her only chance at keeping her Arizona Senate seat beyond 2024. Yet even if she does run as an independent, winning reelection is far from guaranteed, to put it charitably.

Sinema — who alienated many Democratic voters through her opposition to large swaths of President Biden’s agenda — was certain to face a Democratic primary challenger in 2024. And she all but certainly would have lost.

What Sinema’s party switch means for the Senate
The Hill 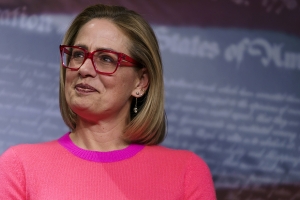 The reverberations from Sen. Kyrsten Sinema’s (Ariz.) announcement on Friday that she has left the Democratic Party and is now an Independent are being felt across the political spectrum, but especially in the Senate itself where lawmakers are evaluating how her decision will change the dynamics of the chamber.

Sen. Raphael Warnock’s (D-Ga.) runoff victory on Tuesday gave Democrats an anticipated 51-49 majority in the upper chamber, with the one extra vote handing them a significant advantage over the current 50-50 split that ranges from subpoena power to the ability...

Sinema’s move could be an ominous one for the two-party-dominant system. Not since Ross Perot’s candidacies in 1992 and (to a lesser extent) 1996 has there been a greater potential for a non-Republican, non-Democratic candidate to contend seriously for the presidency. (And yes, Perot had a real chance to win in 1992 before he started behaving like a loon.) Especially with a doddering and...