The Senate acquitted President Donald Trump of two articles of impeachment Wednesday, prompting a wide range of perspectives from all sides of the political spectrum.

Some right-rated voices focused criticism on House Speaker Nancy Pelosi and her caucus, while some left-rated voices concentrated more on purported flaws with the Senate proceedings. Other outlets focused on the historical significance of Senator Mitt Romney's (R-UT) vote to convict the president of abusing his office.

From the Right
12536
Impeachment
Trump impeachment backfires on Democrats, and Nancy Pelosi has a meltdown
Guest Writer - Right 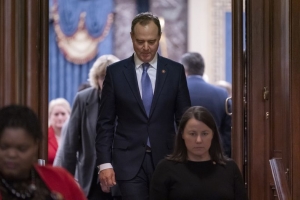 The partisan impeachment of President Donald Trump finally passed, mercifully, like a kidney stone, with Democrats grimacing helplessly during acquittal in the Senate on Wednesday.

The cable news networks loved it because they love a show but there was no real drama. Americans knew for months how this would turn out. They knew Democrats didn’t have the votes in the Senate. It was all about targeting select Republican senators in the next elections.

The people turned off this farce of Democratic Impeachment Theater long ago....

Until Wednesday afternoon, the divide in American politics seemed to be set in high-performance concrete reinforced by tungsten steel rods. That changed when Sen. Mitt Romney (R-Utah) became the first senator in American history to vote to convict a president of his own party.

The word commonly used to describe the virulent partisanship in our politics is “tribal.” But that unfairly disparages indigenous tribes around the world. The divisions have torn apart families and friends. In 2018, when Rep. Paul Gosar (R-Ariz.) campaigned for reelection, six brothers and sisters attacked...

(CNN) - Despite the Trump White House's insistence that the President has been vindicated and exonerated by the Senate vote to not remove him from office, acquittal does not mean exoneration in an impeachment trial.

Trump's acquittal in the Senate was always a foregone conclusion. No American president has been removed from office as a result of a Senate trial. In their wisdom, the founders placed the bar at an appropriately high two-thirds.

Nonetheless, impeachment will be in the first paragraph of Trump's obituary. It puts him in a permanent...

On Wednesday, “President Donald Trump won impeachment acquittal in the U.S. Senate.” The votes were along party lines with the exception of Mitt Romney (R-UT...

The Flip Side
Impeachment

Fox Online News
Impeachment
Bolton: 'My testimony would have made no difference' in 'partisan' impeachment...

Lt. Col. Alexander Vindman has been fired from the National Security Council and escorted out of the White House. “Today, Lieutenant Colonel Alexander...