From the Left
303
Foreign Policy
White House: 9/11 bill did not come up in Saudi discussion
Politico 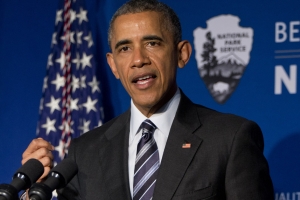 Back in the early days of the Great Recession, there was a lot of foreign policy pundit panic that China would somehow use its holdings of American debt as an economic lever to force Washington to kowtow to Beijing. Also back in tho

Back in the early days of the Great Recession, there was a lot of foreign policy pundit panic that China would somehow use its holdings of American debt as an economic lever to force Washington to kowtow to Beijing. Also back in those early days, I argued that this was nonsense. Seven years later, I like to occasionally bring up this fact, mostly because it’s one of the rare times I think I was unequivocally right.

President Obama faces contentious meetings with European and Gulf state leaders during his trip this week to Europe and Saudi Arabia. Why? Because of his continuing refusal to adopt a serious strategy to defeat ISIS, confront Iran’s increasingly belligerent behavior, and his inexplicable comments published in an April 2016 Atlantic article that blamed Europe and Gulf states for his administration’s growing list of foreign policy failures.

How the House Armed Services Committee, in the Middle of a Pandemic, Approved a Huge Military...
ANALYSIS

WHILE THE COUNTRY IS SUBSUMED by both public health and an unemployment crisis, and is separately focused on a sustained protest movement against police abuses...

In early May a classified CIA update for officers across U.S. intelligence agencies and others with security clearance reportedly cited evidence of a Russian...

FBI Director Wray says half of bureau’s 5,000 counterintelligence cases are related to China

FBI Director Christopher Wray on Tuesday warned Americans that the Chinese government’s theft of American information is taking place on so large a scale,...