Some left-leaning voices have criticized the move for supposedly minimizing the ongoing impeachment inquiry. 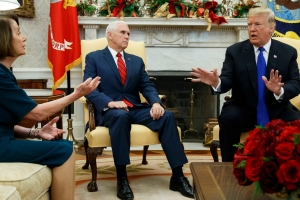 By 10 am, Speaker Nancy Pelosi had both unveiled two articles of impeachment against President Donald Trump and announced that Democrats had reached an agreement with the president on a replacement for the North American Free Trade Agreement.

Democrats were somber in announcing the charges of abuse of power and obstruction of Congress against the president. But the mood was almost jubilant an hour later when Pelosi praised the White House-led United States-Mexico-Canada Agreement, which she said Democrats take "great pride in." Democrats touted their efforts in securing various... 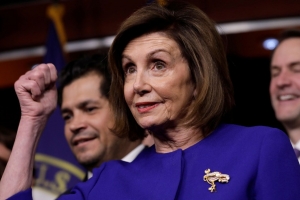 One hour after announcing articles of impeachment against President Trump, House Speaker Nancy Pelosi announced Tuesday that House Democrats had reached an agreement with the White House over Trump’s landmark USMCA trade deal.

“It is infinitely better than what was initially proposed by the administration,” Pelosi said. “It’s a victory for American workers, and it’s one that we take great pride in advancing.”

The deal coincides with House Democrats unveiling two articles of impeachment against the president, and edges Trump closer to victory on a signature 2016 campaign promise with the trade deal.

Story Continued Below
Trump applauded the progress on the agreement, saying it would be "the best and most important trade deal ever made by the USA" and predicted...

President Trump on Friday leveled an extraordinary broadside at the Chinese government, accusing it of a comprehensive “pattern of misconduct” and ordered U.S...

The auto industry faces challenges worse than in 2008, lawmakers say

Auto manufacturing plants across the United States are resuming operations Monday, but it’s unclear whether production and consumer demand will ramp up enough...

The Department of Homeland Security released a report saying that China intentionally delayed telling the World Health Organization about the coronavirus...

China expands its amphibious forces in challenge to U.S. supremacy beyond Asia

China launched its military build-up in the mid-1990s with a top priority: keep the United States at bay in any conflict by making the waters off the Chinese...

The Flip Side
Trade

Reuters
Trade
U.S. sanctions on China are means without an end
ANALYSIS

U.S. sanctions on China over Hong Kong would ratchet up tensions between the two superpowers, but with no obvious goal beyond punishment. President Donald...

The U.S. said Wednesday that it has ordered China to close its consulate in Houston "to protect American intellectual property and American's private...

President Donald Trump on Friday said the U.S. is quitting the World Health Organization and is beginning to revoke Hong Kong’s special status, in an...