Recent data about inflation, wages and poverty is driving confusion about the state of the U.S. economy. The Labor Department announced Tuesday that consumer prices rose 0.3% in August from July, another monthly rise but the slowest increase since January; consumer prices also rose annually again in August, up 5.3%. Producer prices rose in August by 8.3% annually, the highest jump since records began in 2009. Meanwhile, poverty reached a record low in 2020 amid the COVID-19 pandemic. Roughly 9.1% of Americans qualified as poor in 2020 according to the Census Bureau, down from 11.8% in 2019 and the lowest figure since records began in 1967. Average earnings for non-farm employees also rose in August for the fifth consecutive month, but inflation counteracts some of that — wages adjusted for inflation fell 0.5% annually in August, according to the Wall Street Journal. And despite the record-high 10.9 million U.S. job openings at the end of July, the economy remains over 5 million jobs short of its pre-pandemic workforce. The 235,000 jobs added in August were short of expectations.

Left-rated sources focused more on the decline in poverty, often framing it as a direct result of the trillions of dollars of pandemic-era stimulus from the federal government. Right-rated outlets, as well as business-focused center-rated outlets like the Wall Street Journal, instead highlighted inflation and rises in consumer prices, as well as concerns about high government spending and generous federal unemployment benefits. 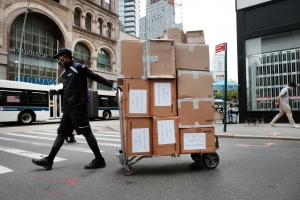 The coronavirus pandemic last year left millions of people out of work and set off the worst economic contraction since the Great Depression. Yet the share of people living in poverty in the United States fell to a record low because of the government’s enormous relief effort.

About 9.1 percent of Americans were poor last year, the Census Bureau reported Tuesday, down from 11.8 percent in 2019. That figure — the lowest since records began in 1967, according to calculations from researchers at Columbia University — is based on a measure that accounts...

Read full story
Some content from this outlet may be limited or behind a paywall.
See full media bias rating for New York Times (News)
From the Center
302
Economy and Jobs
Labor Shortages Give Low-Pay Workers a Raise. Inflation Eats It Up.
Wall Street Journal (News) 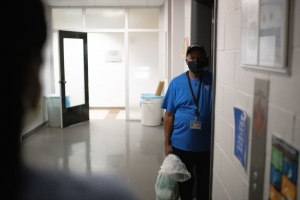 This should be the best of times for low-wage workers, as pandemic-induced labor shortages force employers to sharply raise pay. Yet for many, it doesn’t feel that way, because those same disruptions have pushed inflation to near its highest rate in over a decade.

Read full story
Some content from this outlet may be limited or behind a paywall.
See full media bias rating for Wall Street Journal (News)
From the Right
302
Economy and Jobs
Consumer Price Hikes Soften in August, Annual Inflation Stays Stubbornly High
The Epoch Times 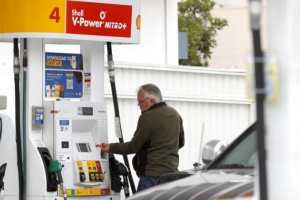 The pace of consumer price inflation fell in August to its lowest monthly level since February, though the 12-month rate of inflation remained historically high, a new government report shows.

The consumer price index (CPI) rose 0.3 percent in August from July, the Labor Department said in a Sept. 14 report, with consensus forecasts predicting a slightly higher 0.4 percent rate of monthly inflation. This is a slower pace of consumer price hikes than the 0.5 percent rate in July and the 0.9 percent in June, with the latter marking the highest monthly spike in the measure since 2008.