The hearing comes after weeks of controversy over accusations that nominee Saule Omarova, a Cornell University law professor who was born in Kazakhstan, holds socialist or communist views. While Republican Sen. Pat Toomey accused Omarova of wanting to “nationalize the banking system,” Democratic Sen. Sherrod Brown accused Republicans of “McCarthyism.” At the hearing, Omarova described some of her now-criticized prior writings as “part of an ongoing academic debate.” She also emphasized the importance of America’s private banks and criticized the old Soviet government for having “no free enterprise and no economic opportunity for people like me.”

Coverage was more common in center- and right-rated outlets on Thursday. Coverage from the right tended to be more critical of Omarova, using language like “claims they were merely academic proposals” and “GOP senators slam Biden pick.” Coverage from the left tended to be more sympathetic, saying things like “Republicans go full red scare” and “Biden’s O.C.C. pick declares her support for capitalism and community banks.” 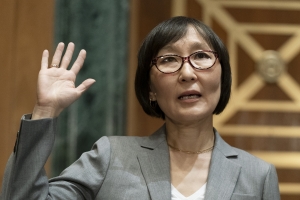 President Biden’s Soviet-born choice to lead a key branch of the Treasury Department was grilled during a confirmation hearing Thursday, with one Republican member of the Senate Banking committee saying he had “never seen a more radical nominee to be a federal regulator.”

Saule Omarova, nominated by Biden to be comptroller of the currency in September, has come under fire for past statements — most notably in a paper titled “The People’s Ledger” that advocated for ending banking “as we know it” by making private banks “non-depository lenders” and moving Americans’ money to the Federal Reserve. 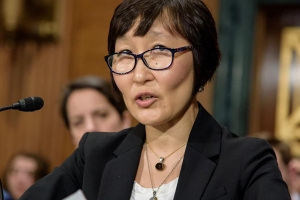 Facing a room full of United States senators — some of whom have suggested she is a communist — Saule Omarova, President Biden’s pick to lead the Office of the Comptroller of the Currency, introduced herself by declaring that she loves two things: American capitalism and community banks.

Ms. Omarova, a Cornell Law School professor, appeared before the Senate Banking Committee on Thursday, the start of what will be a tough path to confirmation as the head of the regulator overseeing national banks. Soon after her nomination, bank lobbyists began...

Read full story
Some content from this outlet may be limited or behind a paywall.
See full media bias rating for New York Times (News)
From the Center
1631
Banking and Finance
Biden’s pick for bank regulator faces rocky Senate hearing over unorthodox research ideas
CNBC 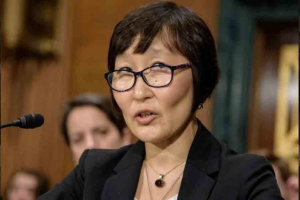 Saule Omarova, President Joe Biden’s pick to be comptroller of the currency — head of one of the nation’s top bank regulators — is expected to face a tough round of questioning Thursday from senators concerned by her academic research, which explores fundamental changes to the financial industry.

Republicans and at least one Democrat on the Senate banking committee are all but certain to grill the Cornell University law professor over unconventional ideas she’s advocated, including magnifying the power of the Federal Reserve to include consumer banking and sweeping checks to the...