Criminal Justice, Donald Trump, White House
Save for Later
Add to My Front Page
From The Center 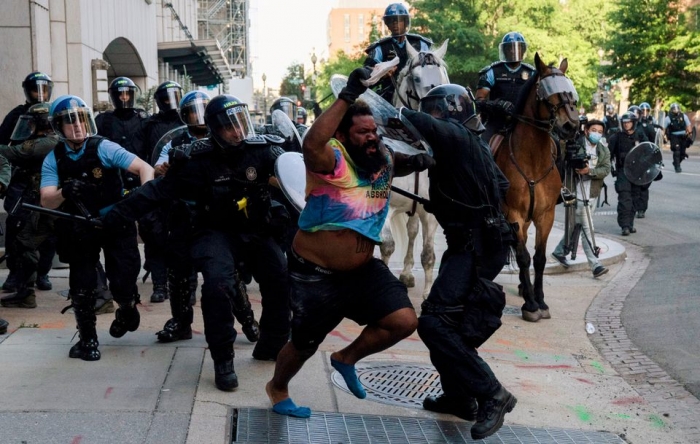 A U.S. government watchdog on Wednesday released a report finding that federal police did not clear protesters from a park near the White House last summer so that former president Donald Trump could walk to a nearby church for a photo opportunity.

The report, by the U.S. Interior Department’s inspector general, said U.S. Park Police violently dispersed people from Lafayette Park on June 1, 2020 as part of a plan made earlier in the day for a contractor to install fencing.

NEWS
Mark And Patricia McCloskey Plead Guilty To Misdemeanors, Agree To Give Up Guns
The Daily Wire

A Minnesota man has been charged with intentional second-degree murder after driving while drunk into a group of people protesting police brutality, according...

“City Hall Put the Kibosh on That”: The Inside Story of How de Blasio Promised, Then Thwarted NYPD...

Years ago, before he was mayor, Bill de Blasio laid out the essence of any effort to reform the country’s largest police department. New York City needed true...

In New York, crime spike is top of voters’ minds

The leading Democrats vying to become New York’s next mayor are promising more policing – a sign of how the debate has moved since last summer’s call to “...

Detectives Just Used DNA To Solve A 1956 Double Homicide. They May Have Made History

It was only three days into 1956 when three boys from Montana, out for a hike on a normal January day, made a gruesome discovery they were unlikely to ever...

More than 800 suspected criminals have been arrested worldwide after being tricked into using an FBI-run encrypted messaging app, officials say. The...

Will rising crime rates sink the push for police reform?

In the aftermath of George Floyd’s murder in May 2020 and the worldwide protest movement it inspired, there were signs that comprehensive police reform was...

A recent viral shoplifting incident has highlighted trends in parts of the country where offenders at local drugstores rule the roost – in one case,...

Mark And Patricia McCloskey Plead Guilty To Misdemeanors, Agree To Give Up Guns

The Supreme Court on Monday found that certain low-level crack cocaine offenders are not eligible for sentencing reductions, a repudiation of the Biden...