Capital Punishment and Death Penalty, Criminal Justice, Polls
Save for Later
From The Center 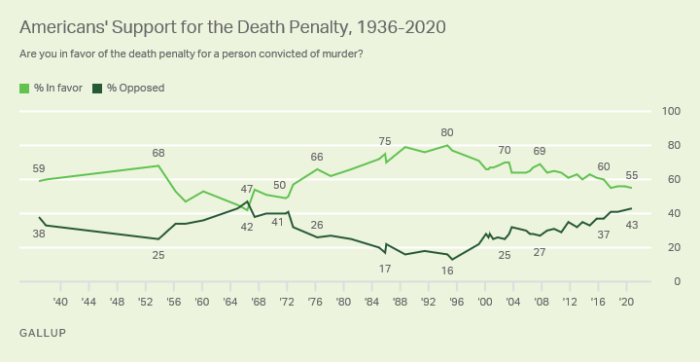 WASHINGTON, D.C. -- Americans' support for the death penalty continues to be lower than at any point in nearly five decades. For a fourth consecutive year, fewer than six in 10 Americans (55%) are in favor of the death penalty for convicted murderers. Death penalty support has not been lower since 1972, when 50% were in favor.

Gallup has asked Americans whether they are "in favor of the death penalty for a person convicted of murder" since 1936, when 58% said they were. In all but one survey -- in 1966 -- more Americans have been in favor than opposed. The 1960s and early 1970s brought many legal challenges to the death penalty, culminating in a 1972 U.S. Supreme Court ruling that invalidated state death penalty statutes. After the high court upheld revised state death penalty laws in 1976, support for capital punishment grew, peaking at 80% in 1994, a time of heightened public concern about crime.