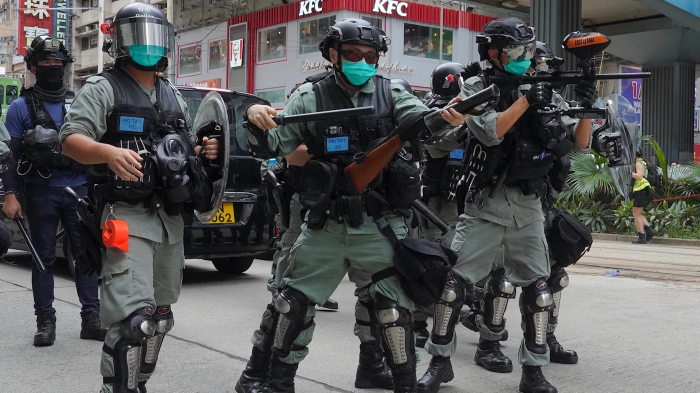 Hong Kong erupted in chaos again Sunday as thousands of protesters marched through the city to protest Beijing’s plans to impose tough new national security laws, which many fear will spell an end to the city’s freedoms.

On Monday, the pro-Beijing government’s top security official denounced the protesters as terrorists, claiming the unrest only underlined the need for the controversial new laws outlawing treason, secession and sedition.

Hundreds of thousands of Hong Kong citizens queued to cast ballots over the weekend in what the Chinese-ruled city’s opposition camp says is a symbolic protest...

United States Secretary of State Mike Pompeo has notified the US Congress that the Trump administration no longer regards Hong Kong as autonomous from mainland...

Thousands of demonstrators filled the streets of downtown Hong Kong on Sunday, defying social distancing protocols to protest Beijing’s announcement of a...

As Coronavirus Keeps the West at Bay, China Moves to Tame Hong Kong

China’s leader, Xi Jinping, has made one of his boldest political gambits yet, wagering that he can tame Hong Kong through national security legislation,...

A pandemic that once may have seemed far away has now crept up to your front door. Isolated and empty streets, roads devoid of cars, and lockdown at 10 p.m.—...

WASHINGTON—President Trump said he signed into law a bipartisan sanctions bill to punish Chinese officials over Beijing’s crackdown on Hong Kong, in an hour-...

The Upside of a New Cold War With China
OPINION

The American founders believed that prolonged rivalry and conflict abroad would eventually degrade the country’s democracy at home. Today, many of the...

President Donald Trump expressed approval of a concentration camp for Uighur Muslims in China during a private meeting with Chinese President Xi Jinping,...

(New York) – China’s proposed national security law for Hong Kong is a devastating assault on human rights and should be abandoned, more than 86 civil society...

China on Monday announced sanctions against a number of U.S. officials, including Sens. Marco Rubio and Ted Cruz, in retaliation for legislation intended to...

Numerous books have been pulled from the shelves of libraries in Hong Kong after the Chinese Communist Party’s (CCP) new Hong Kong security law went into...

Tensions are high in Hong Kong after the communist regime in China approved a contentious new national security law that took effect today. The law has already...

One of China’s main propaganda outlets has paid American newspapers nearly $19 million for advertising and printing expenses over the past four years,...

Secretary of State of Mike Pompeo has notified Congress that the Trump administration no longer regards Hong Kong as autonomous from mainland China and no...